During the mid 1960’s, as NASA was aggressively working toward President John F. Kennedy’s desire to land a man on the Moon, NASA administrator James Webb asked that a committee be established, to be led by Dr. Frederick Seitz, President of the National Academy of Sciences, to engage the academic community in NASA’s efforts. In July 1967, the concept of a Lunar Science Institute (LSI) was born out of those discussions.

On March 1, 1968, President Lyndon B. Johnson visited NASA’s Manned Spacecraft Center (now the Johnson Space Center, or JSC) in Houston, Texas, and made the following pronouncement: 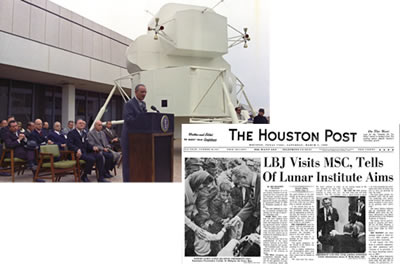 On October 1, 1968, the LSI was formally established by NASA contract with the National Academy of Sciences to operate the new entity in cooperation with Rice University. Needing a more permanent entity to manage the LSI, in March 1969 the National Academy of Sciences, at the request of NASA, chartered the Universities Space Research Association (USRA), a nonprofit consortium of universities. USRA’s purpose was to foster cooperation among universities, other research organizations, and the U.S. government for the advancement of space research, and in December 1969 USRA assumed management of the LSI under contract to NASA. 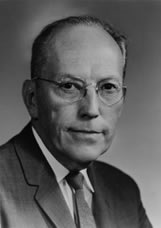 Dr. William W. Rubey, professor of geology and geophysics at the University of California, Los Angeles, was appointed as the first Director of the LSI on October 31, 1968. At that time, LSI held temporary offices at the Manned Spacecraft Center (MSC) and five months later moved into leased office space within close proximity to MSC. In October 1969, LSI moved into the newly renovated West Mansion, adjacent to the MSC, which had been deeded to Rice University with the stipulation that the property be used for research purposes. The dedication ceremony took place on January 4, 1970, and included remarks from NASA Administrator Thomas Paine, who concluded his speech with reading the words cast on a commemorative plaque, which still hangs outside the doors of the current building:  “Dedicated to the scientists of the Earth who seek to understand the nature, origin and history of our solar system.” 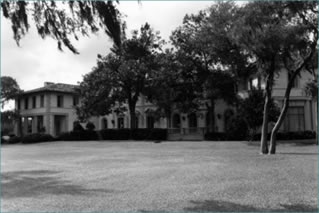 LSI’s research broadened to include the terrestrial planets, their satellites, the asteroids and meteorites, and the jovian and saturnian planetary systems, which prompted LSI’s name change in 1978 to the Lunar and Planetary Institute (LPI). In January 1992, LPI bid farewell to the West Mansion and moved to a nearby office building—in close proximity to NASA Johnson Space Center—which it still occupies today. 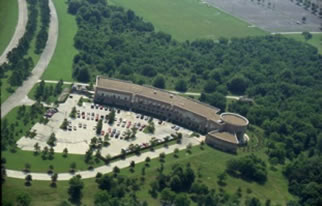 Throughout its history, the LPI has made significant contributions to the understanding of lunar and planetary science. LPI staff scientists, postdoctoral fellows, and visiting scientists, whose fields of research represent much of the breadth of the planetary science community, pursue innovative research, support NASA programs, provide a connection to the university scientific community, and contribute vital science focus to all LPI activities.