Mars from Above: Viewing Volcanos

This activity has been modified from Lava Layering, an activity in Exploring the Moon:  A Teacher’s Guide with activities for Earth and Space Sciences, NASA Education Product EG-1997-10-116-HQ by J. Taylor and L. Martel and the Scratching the Surface unit of Explore! Mars:  Inside and Out, Lunar and Planetary Institute, 2007.

Viewing Volcanos is a 15-minute activity in which children ages 8–13 create volcanos like those they have examined on Earth and Mars through images taken by spacecraft. Using baking soda and vinegar, they model volcanic eruptions. The children explore the basics of volcanos, how scientists view and identify these features from space, and reflect on what the presence of volcanos means about a planet’s interior.

Tips for Engaging Girls in STEM:

For each group of 4–6 children (one station):

Divide the children into groups of 4–6 children each. Each group should have one volcano table/station with materials and an adult facilitator (if possible).

1. Consider the images of volcanos on Mars and Earth.

Let’s find out how they form!

Facilitator’s Note:  Volcanism in a Big Way
Early Mars was volcanically active, spewing lava across its surface, and water and carbon dioxide into its atmosphere. Much of this early history, recorded in the older southern highlands, is obscured by impact craters.

From about 3.5 billion years ago until more recently, the volcanic — and tectonic — activity has been concentrated around the Tharsis region near the equator. Tharsis is a huge bulge in the martian crust, capped by prominent volcanos. Some scientists suggest the bulge overlies a region of hotter than normal mantle. The high temperatures allowed the development of numerous large volcanos. These volcanos thickened the crust, causing Tharsis to be higher than other parts of Mars. The crust was pulled apart to form the immense canyon of Valles Marineris more than 3 billion years ago.

2. Share with the children that they are each going to create their own volcanos to take home with them. To create the volcano, follow these steps: 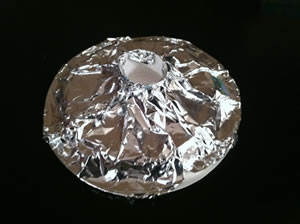 Your volcano is now complete and ready!

3. Share with the children that they are each going to create volcanic eruptions and examine how the lava flows and consider what it tells us about the inside of a planet! Each child will now model eruptions and observe how volcanos are created from flowing lava.

4. Discuss how scientists identify volcanos on Mars without being able to see them from the surface. Direct the children’s attention to the set of Mars Cards. Explain to them how the images were taken so that they understand that they are looking down on these features from space — just like the orbiting spacecraft that took the images! Note: If the children have completed the Mars Match activity, remind them what they learned about observing geologic features — such as volcanos — from space.

(1) Flip the bowl upside down and place it on a surface. Invite the children to look at the bowl from the side. Does it look like a hill or mountain from this viewing angle?

(2) Next, invite the children to look at the bowl or hill from above. They are now looking at the bowl in much the same way as the spacecraft looked at Mars when taking images.

How does the “hill” look to the audience now? Is it different than viewing from the surface? Yes! Looking down on features, it is not easy to tell what is sticking up from the surface, like a hill/mountain, versus what is dipping in below the surface, like a crater/hole. By using the flashlight to simulate sunlight hitting the bowl (our geologic feature), we can observe where shadows occur. This can help us to determine the relief of the topography — whether it is sticking up or dipping below the surface. Notice for features sticking above the surface, like a hill/mountain, the shadow lies outside the feature, opposite the direction of the sunlight. For holes or depressions in a surface, the shadow will lie inside the feature, opposite of the direction of sunlight.

Have the children reflect on what they observed and the images from Mars and Earth, their eruptions, and what the presence of volcanos indicates for the possibility of life on a planet. Optional:  Invite them to record what they learned in their Extreme-O-File activity pages for this activity.

Add the Explore:  Mars Inside and Out activity, Scratching the Surface — Crater Creations, as an additional station. In this activity, the children will model the formation of craters and can consider how they are viewed by scientists from space (in much the same way that was done for the Viewing Volcanos activity). Make sure to include the Mars Match Cards and Earth Placemat Images (craters only) as a part of the discussion. Summarize that Mars and Earth have been shaped by similar processes, and that we can find craters on both planets. Some of these craters are associated with the central vent of volcanos. For the activity information and instructions, please visit Scratching the Surface - Crater Creation.