This station investigates the Moon's infancy, 4.5 billion years ago, when the Moon was still probably hot enough from its formation for at least its surface to be melted. Children model how an ocean of molten rock — magma — helped shape the Moon that we see today. Dense materials in the molten mixture sank, while the least dense materials floated to the top and cooled to form the light–colored areas we see on the Moon today. Children create a simple model of this process by mixing household items of different densities in a bottle and allowing to them to settle into separate layers. They decide which materials make the best model for the infant Moon. Children may examine a type of Earth rock (named anorthosite) that is also found on the Moon and that would have been shaped by the processes explored here.

The following materials are for one Moon Mix! activity set and will serve approximately 10 children working in teams of two to three.

Three sets are recommended for a station:

Described in the children's guide.

Facilitator's Note: In this activity, the children are using their knowledge of density to model a process that occurred on the early Moon. If necessary, remind them that density is a measure of how much "stuff" (mass) is contained in a certain space (volume). Density refers to how tightly that material is packed together.

Many of the household items listed above behave predictably when placed in water:  for example, the aquarium gravel sinks and the coffee stirrer sections float. Other items may behave in surprising ways! The children use the cup of water to test the materials before creating their Moon Mix! bottles. They determine how they can best create a mixture that separates into three layers. 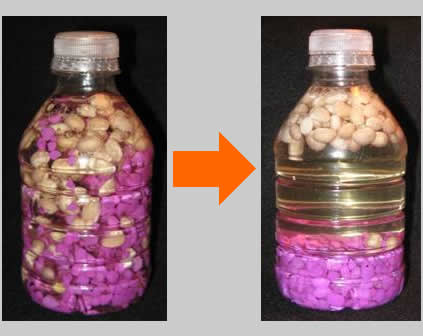 The best combination of items to model the early Moon's magma ocean is corn syrup, aquarium gravel, and navy beans. (Note that the water bottle should be emptied first; corn syrup is too difficult to distinguish from water to use both liquids as layers, and it is soluble in water.) At first, the navy beans and gravel sink in the corn syrup. After vigorous mixing — the children will need to shake long and hard — the navy beans will slowly float to the top when finally allowed to settle.

Sometimes some of the household materials will get "caught" in the wrong layers of the Moon Mix! bottles. This also happens inside moons and planets!

In building their understanding of the history of events that took place during the formation and early changes to our Moon, the children used a concept familiar to them — that some materials sink and others float — to create a model for themselves. They tested, then selected, one type of item that sank and one type that floated and mixed them together in a bottle of water or corn syrup. The model represents the separation of materials within the Moon's early magma ocean.

The children should understand that this process of separation helped shape the Moon that we see today. The "infant" Moon (4.5 billion years ago) was still probably hot enough from its formation for at least its surface to be melted. Scientists call this hot, molten mixture of different materials the "magma ocean." Over time, dense materials sank, while the least dense materials floated to the top and cooled to form the lunar crust. We see these least dense materials when we look at the Moon today; they form the light-colored areas we see on the Moon. The darker patches are denser materials that rose to the surface later, during the Moon's "teenage years."

In the children's models, some types of items sank and others floated in water because they have different densities. Aquarium gravel, buttons, dried navy beans, marbles, sequins, or pancake syrup sank because they are more dense water, and coffee stirrer sections, dry sponge, pony beads, small Lego pieces, wooden beads, or vegetable oil floated because they are less dense than water. Sometimes, some of the items got "caught" in the wrong layers. This also happens inside moons and planets. Also like the early Moon's interior, where all of the materials that made up the Moon’s outer layers were mixed together as an ocean of magma, the items in the children's bottles were mixed together. Then the items separated into layers.

Some of the items behaved differently when placed in corn syrup. Dried navy beans are less dense than corn syrup, so they floated (eventually!), while aquarium gravel sank.

The children investigated a type of Earth rock called anorthosite, which they should recognize as similar to those found on the Moon. They located the light-colored regions that we see on the Moon:  the lunar highlands. They should recognize these areas as made up of the light-colored type of rock and connect their formation to the less-dense materials rising to the top of the magma ocean.

Like the children did, scientists investigate the Moon by creating models, as well as by studying Moon rocks and surface features.

A Little Background for the Facilitator

The Moon was hot during its "infancy." It had just formed from the debris left over after a giant impactor struck Earth. As the debris reassembled — accreted — to form our Moon, it heated up. Each impact added material to our growing Moon, but each impact also generated heat. Eventually, heat from thousands and thousands and thousands of impacts caused the surface of the Moon — or perhaps the entire Moon — to melt. Scientists call this deep ocean of molten rock the "magma ocean." The evidence for a magma ocean comes from the observation that the oldest crust, which makes up the outer layer of the Moon, is all made of the same rock type:  a light-colored rock named "anorthosite."

Anorthosite itself is primarily made of a single mineral, called plagioclase feldspar, which contains a lot of aluminum and has a relatively low-density. This mineral floated to the top of the magma ocean, where it cooled to form the Moon's crust. This slow crystallization from magma is the only known way to produce acrust made mostly of one type of mineral. This rock forms the "lunar highlands" which are the brighter, light-colored, heavily cratered regions we see on the Moon today.

Deeper parts of the Moon's crust and mantle include larger amounts of other, heavier, minerals, such as pyroxene and olivine. These denser materials sank out of the magma ocean. Later, during the Moon's "teenage years" of volcanic activity, some of these denser materials re-melted and rose to the surface. These materials make up the dark patches we see on the Moon.

The magma ocean cooled and crystallized over a period of 50–100 million years to form a lunar crust that is, on average, about 42 miles (68 kilometers) thick. The oldest rocks collected by Apollo astronauts are 4.5 billion years old, which is thought to indicate when the Moon’s crust solidified.