Children model ancient lunar impacts using water balloons. By measuring the diameter of the crater area, children discover that the Moon's largest impact basins were created by huge asteroids! Like these huge asteroids, the water balloons are destroyed on impact and leave a splash (i.e. a "crater") that is 10 to 20 times wider than the impactor. The largest basins formed on the young Moon, when it was 400 million to 800 million years old. Children find the impact basins — the Moon's largest features — on a map and consider how they have changed since they first formed to become the dark patches ("maria") on the Moon's face. Children may examine a type of Earth rock (named breccia) that is also found on the Moon and that would have been shaped by the processes explored here.

The following materials are for one Splat! activity set and will serve approximately 10 children working in teams of two to three.

Described in the children's guide.

Facilitator's Note: The children will measure the width of their balloons and the splashes they create. They will do a simple calculation in their comic books. For example: 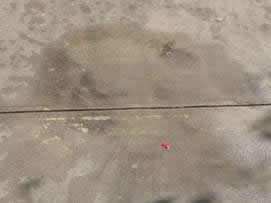 Most impacts are 10 to 20 times the size of the asteroid.

Once they have completed the experiment, the children should understand that the large circular features they observe on the Moon are impact basins. They were formed by large impactors — asteroids or comets — striking its surface. Craters and basins on the Moon are larger than the asteroids and comets that created them — 10 to 20 times larger!

Impactors are like water balloons because they are destroyed upon impact, and very little of the asteroid or comet remains. Remnants of asteroids found on a planetary surface are called meteorites. Asteroids are much more rocky and moving faster than the balloons in this model; they are far more damaging.

Scientists experiment with physical models — like the children did — to determine the size of an impactor. Their models use projectiles that can move at high speeds and impact different types of materials. Videos of these impacts help scientists model how the materials behave. Scientists also use computer models to understand what happens during an impact. They also study impact craters on Earth, like Barringer Crater (Meteor Crater) in Arizona to understand impact processes. The meteorites and altered rocks and minerals in these craters contain clues as to the type, size, and speed of the impactor.

A Little Background for the Facilitator

A storm of impacts occurred shortly after the Moon and planets formed. The impactors left their mark: Huge impact basins such as Imbrium, Crisium,and Serenitatis, which are hundreds of miles across, markwhere the impactors struck the Moon.

The impacts broke apart the rocks at the surface of the Moon and fused them into impact melt breccias — rocks made of angular, broken fragments, finer matrix between the fragments, and melted rock. These rocks, collected by Apollo astronauts, provide scientists with the timing of basin formation.

All of the impacts appear to have occurred when the Moon was relatively young — about 400 million and 800 million years old (or, between 4.1 and 3.7 billion years ago). This is a remarkably narrow window of geologic time.

This period of impacts is one of the mysteries scientists are working to solve. The timing continues to be a puzzle: Were these impacts just part of the gradual "clean up" of debris left over after solar system formation? Or were they part of a distinct period of asteroid bombardment? Scientists wonder how an event of this magnitude could have happened: Where in the solar system could so many asteroids have come from? What caused this to happen? Recent research suggests that asteroids from the asteroid belt between Mars and Jupiter may have been pushed out of their relatively stable orbits by the gravitational interactions of the largest planets. Scientists also find evidence for large impacts from this time period on Earth as well as the other planets.

When the Moon was about 800 million years old, the period of intense bombardment came to a close; impact events became less frequent and were generally smaller. Small, infrequent impacts still occur on the Moon, Earth, and all other planetary bodies today. Scientists distinguish between "impact craters" and "impact basins." Basins are 190 miles (300 kilometers) across, or larger. When you look at the Moon, you can easily see the large, circular basins.

The size of an impact crater depends on the speed and size of the asteroid or comet before the collision, and the material it is impacting. A faster impact will create a larger crater. Typically, asteroids hit Earth at about 20 kilometers (slightly more than 12 miles) per second. Such a fast impact produces a crater that is approximately 20 times larger in diameter than the asteroid. Most impacts will be 10 to 20 times the size of the asteroid. Smaller planets have less gravitational "pull" than large planets; asteroids and comets will strike at lower speeds.

Scientists have observed small asteroids and comets hitting the Moon and Earth, and these formed small craters. NASA's Lunar CRater Observation and Sensing Satellite (LCROSS) mission intentionally impacted the Moon's south pole with a used rocket and the spacecraft itself on October 9, 2009. The crater left by the LCROSS impacts were about a third of a football field across and less than 10 feet (about 3 meters) deep.