In this 1-hour activity, children, ages 8 to 13, portray our Moon's remarkable beginnings through a giant impact. Children color images of the latest scientific data depicting the Moon's formation to create their own comic strips of our Moon's birth. The children use different-colored balls of Play-Doh® to model the impact between Earth and a small planet 4.5 billion years ago. "Debris" from both "planets" is rolled into a small ball to model how our Moon formed through the process of accretion of smaller particles. 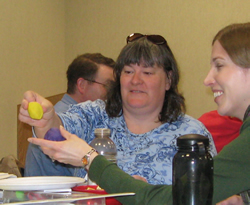 For each team of two to three children:

1. Invite the children to imagine the Moon’s beginnings. Explain that, like lunar scientists, they will create a model to explore their ideas. Provide teams of children, working in groups of two to three, with two colors of Play-Doh and a plate. Each team discusses their ideas of how the Moon formed, then enacts one of those ideas with Play-Doh. The teams present their models to the group.

Add that video games often model the human form in realistic or imaginary settings. Characters move and interact like you might expect they would in "real life," but allow you to explore events that are too complex or large-scale to represent. Computers allow us to recreate a racing game, a battle, an interactive city, or the formation of the Moon 4.5 billion years ago. We use models — made either with computers or Play-Doh — to help us represent objects and systems so that we can study and understand them more easily.

Throughout history, scientists have suggested many different ideas — hypotheses — to explain the Moon's birth. They used astronomical observations and geologic investigations to help them improve their hypotheses. In science, hypotheses have to reflect all current evidence or they must be discarded. Since no one actually witnessed the Moon's formation, lunar scientists use computers to model the Moon-forming impact. Computers can trace the motions of the Moon and Earth back in time. Scientists continue to share their models with each other and discuss how they fit — or do not fit — the current evidence.

2. As they listen to the story of the Moon's formation, the children will work in teams to enact the story of the Moon’s birth with their models. Scientists believe this model best fits all the evidence. First, have the children create one ball of Play-Doh to represent Earth.Show them the first page of Moon's Birth Story and read the following passage, which is printed on its back side for easy reference.

Far back in history, 4.5 billion years ago, Earth did not have a Moon.The Earth itself had formed only recently. The young moonless Earth was a very different place. Much — perhaps all — of its surface was molten, there was no ocean or mountains or things living on it. Instead of a blue-green planet, Earth was glowing red with rivers and seas of lava.

Facilitator’s Note: Describe the young Earth with more detail to older children, ages 12-13. They may already be familiar with Earth’s internal structure, which includes a solid core at the center, surrounded by a liquid core, with a mantle and crust above. The young Earth had already begun to form its layers; it had a core of metal and a mantle of hot, rocky material.

The children will have an opportunity to learn about these features in the next activity, Recipe for a Moon.

3. The children continue listening and shape a small planetary body with Play-Doh. Ask them to select a different color of Play-Doh and roll out another ball, just half of "Earth's" width, to represent the small planetary body. Show them the second page of Moon's Birth Story and read the following passages, which are printed on its back side for easy reference.

For millions of years, Earth and another small planetary body orbited the Sun in the same region of our solar system.

Check to see that each team’s large “Earth” is twice as wide as the small ball.

4. Invite the children to smash the small ball deep into the larger one. Have them pinch off many small pieces of Play-Doh, totaling about ¼ of the size of the larger ball, from both "Earth" and the "impactor." Explain that the small pinches are debris, pieces of the Earth and the small planetary body thrown off into space during the impact. Have them set these pieces aside on the cardboard plate while they continue working with "Earth." Have the children mold the large ball closed such that only one color is visible on the surface.

The collision of Earth and the small planetary body occurred over about ten minutes.

The small planetary body didn't hit the center of Earth, like a bulls-eye, but off to the side, pushing Earth into a faster spin. It may also have knocked Earth so that it tipped over a little, helping to give Earth the 23.5° tilt of its axis that it has today.

Pieces of the small planetary body went deep into Earth and became mixed with the materials there; some pieces were spewed into space around Earth and became our Moon; and some were vaporized by the impact.

5. Explain that the children will shape the small pinches of Play-Doh into our Moon, modeling the process that formed the real Moon. Have the children put "Earth" to the side and retrieve the "debris" and the cardboard plate. Using a circular motion, ask the children to move their hands around on the plates, applying a slight pressure to the small pieces of Play-Doh. Show them the third page of Moon's Birth Story and read the following passage, which is printed on its back side for easy reference.

Sections of the Earth's outer layers (mantle), together with debris from the small planetary body, were thrown into orbit around the Earth. For a time, Earth had a ring around it. Over a short time — perhaps a hundred years or less — the ring of gas, dust, and molten rock clumped. The pieces collided, and if they collided slowly enough, they stuck together. The clumps later grew massive enough to attract debris (through gravitational attraction). All the clumps and dust grew into our Moon.

Add that scientists call this process of clumps clumping together to make larger and larger clumpsaccretion.

In reality, the particles in the cloud from which our Moon formed were all part of a rotating disc or ring, but they also were moving relative to each other, causing collisions. The collisions were random; sometimes particles stuck and sometimes they did not —sometimes collisions caused particles to break apart! As the clumps grew larger, they eventually reached a point where they were large enough — and therefore had enough gravity — to begin attracting particles. The largest attracted more and more particles, growing larger faster and faster to form our Moon.

Check to see that each team's "Earth" is about four times wider than their "Moon." Have them add or take away Play-Doh from the smaller ball to create the correct size.

6.Optional: Play the American Museum of Natural Historys animation of the Moon’s formation, AstroViz: Our Moon.

Allow the children time to depict their models in comic-strip form. Provide each child with the Moon's Birth comic strip and invite them to illustrate the impact, the collisions of material in the resulting ring of debris, and infant Moon that formed within 100 years. Explain that the images of the Moon-forming impact come from real scientific models, carefully developed by a team of scientists over many years with complex calculations. They present the images and calculations to other scientists so that they can make their own computer models. Scientists change their models to fit new astronomical observations and as clues from lunar rocks and meteorites provide new ideas.

Instruct the children to add the Moon's Birth comic panel as the next page in the Marvel Moon comic book by clipping the book together at the upper left corner.

Invite the children to return for the next activity, Recipe for a Moon, where they take a peek inside the Earth and Moon with edible models.