Lunar Phases: A Dance Under the Sun

Adapted from Exploring Lunar Phases with a Daytime Moon, Astronomy from the Ground Up, Astronomical Society for the Pacific, 2006. 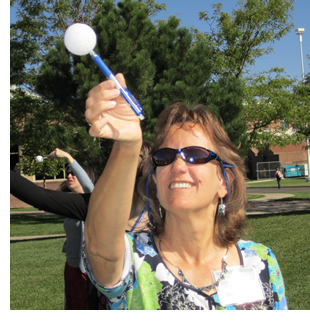 Children ages 10 to 13 perform the lunar phases outdoors, using a Polystyrene ball, sunlight, and the motions of their bodies to model the Moon's phases. Older children (12 to 13) predict future Moon phases. Allow 20-30 minutes for this activity.

This activity is a follow-up after the concept of the lunar cycle has already been introduced, ideally through observations of Moon phases by way of an activity such as Moon over My Town.

Note that this activity is appropriate for older children (ages 10 to 13) who are able to explore the geometry of Sun-Earth-Moon relationships in three dimensions. Many children under 10 are not able to fully conceptualize the Earth's spherical nature and their relationship to it, and so they are unable to create an accurate mental model.

Facilitator's Note: If it is cloudy on the day of the program or you do not have a suitable outdoor venue, model the lunar phases indoors with a blacklight as the source of light instead of sunlight as described in the Lunar and Planetary Institute's lesson plan for classroom teachers, Golf Ball Phases. Provide a darkened room and use golf balls glued to golf tees in place of the Polystyrene balls and pencils. Ask the children to lift the ball over their heads when facing away from the light and bring it low towards their navels when facing toward the light. Otherwise, their shadows will block the light and reinforce the erroneous idea that phases are caused by Earth's shadow.

Find other "emergency substitutions" in the Further Activities and Lessons and Videos resources sections.

Facilitator's Note: It is important that each child have an opportunity to model phases for him/herself. Children must view the phases of the Moon from Earth's perspective by manipulating the ball around their heads. Watching another perform the "dance" will show them the Moon's phases from the perspective of floating out in space and will lead to confusion.

1. Explain to the children that they will use Polystyrene balls to model how the Sun creates the Moon’s phases. Their bodies will represent the Earth and they will observe how the Moon’s shape appears to change as viewed from Earth. Point out that in this dance, they are modeling the motion of the Moon rather than of Earth.

Add that we call the motion of the Moon around the Earth its orbit. Together, the Moon and Earth orbit the Sun.

Facilitator’s Note: The purpose of this activity is to confront erroneous ideas related to the phases. Many children erroneously think that the Moon’s phases are caused by Earth’s shadow falling on the Moon and blocking our view. Through this model, they will encounter the scientifically-accepted explanation for lunar phases: As the Moon orbits (or revolves) around the Earth, the sunlight reflects off of various sides of the Moon. We see phases as the part of the Moon reflecting sunlight changes.

2. Provide the children with the Polystyrene balls and pencils. If it has not already been done for them, show them how to insert the pencil into the ball to make a handle. Ask them to hold their Moon balls at arm's length. Remind the children of the activity Earth’s Bright Neighbor. Have them recall the vast distance that separates the Moon and Earth and the even greater distance to the Sun.

3. Ask the children to consider that the Moon has day and night, just like Earth. Remind the children of the Mirror Moon demonstration.

4. Bring the children outside and ask them to move their "Moons" to match the phase of the real Moon in the sky. Allow them sufficient time to experiment and find the appropriate orientation. They should find that they need to hold it just below the Moon in the sky. 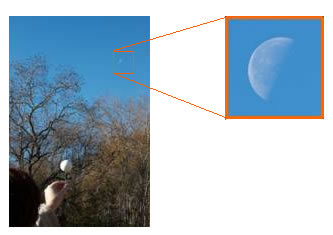 5. Have the children relate the Moon’s orbit around the Earth and the Sun’s light as the reason for the lunar phases. Illustrate the Moon's motion around the Earth — its orbit — by moving a Moon ball around your body in a counterclockwise direction. Bring the Moon ball up high as you face toward the Sun. Hold the handle at an angle and bring the ball down low in front when you face away from the Sun. Invite the children to do the same and avoid putting their "Moons" into their shadows.

Facilitator's Note: The children will find that they must hold the ball at an angle and change the height at which they hold the ball in order to duplicate the Moon's appearance. This angled circle mimics the Moon's true angle relative to Earth. Note that it is not nearly as extreme as in this model (which is exaggerated because we are all standing on the Earth!), but only tilted about 5 degrees.

This tilt shown in this model is crucial to developing an understanding of phases. Many children — and adults — believe that the Moon passing through Earth's shadow causes phases. The Moon’s orbit remains tilted as the Earth orbits the Sun, carrying the Moon above or below the direct line of sunlight streaming onto the Earth. The Moon usually does not enter Earth’s shadow or cause a shadow on Earth's surface.

Lunar eclipses are special occasions where the full Moon passes into Earth's shadow. Solar eclipses occur when the new Moon passes between the Earth and the Sun, blocking out the Sun’s light for those standing within the Moon's shadow. The Moon is so distant that this shadow only covers a small part of Earth's surface — making total solar eclipses a special treat for those in the path! Educational research shows that it is confusing to children to discuss eclipses before they have mastered an understanding of phases, so eclipses are not treated in this activity. Advanced learners may enjoy tackling the concept in Golf Ball Phases.

Invite the children to determine what the Moon's motion is by estimating the number of days in one month as 30 and performing a simple calculation.

Demonstrate how the children can measure degrees in the sky: extend your fist (thumb facing upward) to arm’s length to measure 10 degrees. Lift your thumb slightly to measure 12 degrees. Invite the children to predict the position and phase of the Moon in the future and position their Moon balls in that place.

Have the children estimate 12 degrees and move their Moon balls counterclockwise that distance. Invite them to describe the phase they see on their Moon balls as a prediction of what the Moon will look like in tomorrow's sky.

Have the children use their Moon balls to answer these questions.

7. Invite the children to perform their dances for you and explain why the Moon has phases. Ensure that they are turning in a counterclockwise direction. Gently redirect any explanations that rely on Earth’s shadow as the source of phases, and encourage the children to only rely on the Sun’s illumination falling on only half of the Moon at a time in their explanations.

8. Have the children consider what Earth would be like without the Moon’s light. Share that Galileo used a simple spyglass — intended for use on land and sea — to discover features of the Moon, Jupiter, and Saturn in the sky. Discuss how our understanding of the Universe might be different without the nearby Moon to study.

Allow the children time to illustrate what it would be like without the Moon's light and opportunities for exploration. Provide them with their Without the Moon... 1 comic panels and art supplies. Instruct them to add it as the next page in the Marvel Moon comic book by clipping the book together at the upper left corner.

Summarize that models, like the one the children made, are useful scientific tools. They are especially useful for bringing past events to life in 3D! The children may discover how challenging it is to illustrate, in two dimensions on paper, their complex ideas. Scientists use computer models to help them understand the relationship between the Sun, Earth and Moon. They use complex mathematics to look at the past, into the future, and for considering what might have been!

Ask children 10 and older to return to take a deeper look at the Moon's influence on Earth — and how Earth would be different without the Moon — through the activity Spin! Day and Night.