Adapted from Kinesthetic Astronomy, by Dr. Cherilynn A. Morrow and Michael Zawaski, 10 August 2004. 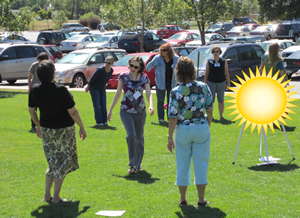 The Moon is the reason for our 24-hour day! In this 45-minute activity, children ages 10 to 13 explore Earth's rotation and the Moon's role. In part A, children use their bodies to model the Earth's daily motions in this kinesthetic exploration. The motion of the Earth about its axis (rotation) is related to the appearance of the sky over the course of the day. In part B, children consider the role of the Moon in slowing Earth's rotation over time; if the Moon didn't exist, Earth might be spinning more quickly, giving us an eight-hour day!

Note that this activity is appropriate for older children (ages 10 to 13) who are able to explore the geometry of Sun-Earth-Moon relationships in three dimensions. Many children under 10 are not able to fully conceptualize the Earth's spherical nature and their relationship to it, and so they are unable to create an accurate mental model.

Facilitator's Note: While the Moon and Earth do not physically touch, they are linked by an invisible, but important, force: gravity. The Moon's gravity plays an important role in how the Earth moves — they are linked in an eternal "dance."

Part A: Earth Spins Once in a 24-hour Day

1. Explain to the children that they will use their bodies to model how Earth's spin — rotation — creates the cycle of day and night. Because the Moon and Earth are in motion together as they orbit the Sun, this model will be similar to a dance. Invite the children to form a circle around the "Sun" pumpkin. Explain that each child's upper body represents planet Earth. Ask the children to make sure they stand with enough room between each other to spread their arms out at shoulder height.

We use models to help us represent objects and systems so that we can study and understand them more easily. Scientists use computers to create models to study the complex interactions between the Sun, Earth, and Moon.

Alpha Centauri, the Sun’s nearest stellar neighbor, wouldn’t even be in the same country! It would be a pumpkin-sized star 25,000 miles away — a distance equal to the circumference of the real Earth at the equator!

2. Invite the children to become familiar with their Earth models by touching various geographic landmarks.

Distribute a sticker to each child and have everyone place them in the center of their chests (right over the breast bone/sternum). Explain that, for this model, the sticker represents "home."

Remind the children that North America is on their chests and use the globe to help them visualize the directions. Allow them to locate East and West and hold the signs in the appropriate hands: The right hand holds a "West" sign and the left hand holds an "East" sign.

5. Have the children "dance" like the Earth and observe the changing view of the sky from "home."

Explain that the Moon is sometimes visible in the morning sky and encourage them to look for it the next time they are up early.

If the children have not noticed the daytime Moon before, challenge them to look for it over the course of a month!

Explain that the Moon's gravity (and to a lesser extent, the distant Sun's gravity) acts much like someone pulling on their shirts: it pulls on the Earth's oceans (and on the less movable solid surface). The Moon’s pull is slowing us down.

Facilitator’s Note: How do we know that the Earth has been slowing down? Scientists count growth rings in coral fossils and ancient bacterial mounds, called stromatolites, like tree rings. Corals living 400 million years ago and bacteria living 3 billion years ago lived in a faster-paced world with shorter days and nights. Computer models trace the Moon's and Earth's motions backward in time. According to these models, the infant Earth had a six-hour day. With only the weaker pull of the Sun to slow it down, a Moon-less Earth might have an eight-hour day.

Part B: What If There Was No Moon?

6. Have the children consider what Earth's day and night cycle would be like if there was no Moon to slow its early, rapid spin. Ask them to spin quickly — and carefully! — to model an eight-hour day.

Scientists puzzle over whether the Moon-forming impact helped speed up the spin of the infant Earth, but it is certain that since then, the Moon has shaped our Earth's day and night cycle into its familiar 24-hour pattern! Scientists use computer models to help them understand the relationship between the Sun, Earth and Moon — just like the children used their own bodies!

Provide the children with their Without the Moon... 2 comic panels and art supplies. Allow them time to illustrate how different it would be on Earth with shorter days and shorter nights. Encourage creativity! Instruct them to add the panel as the next page in the Marvel Moon comic book by clipping the book together at the upper left corner.

Ask 10-year-old children to put their science skills to the test in the activity Moon Mythbusters. Invite children 11 and older to return for the next activity, Steady Partner, Steady Seasons, to explore the Moon’s role in providing Earth's long history of stable seasons.