The Moon's Formation and Evolution

The current scientific hypothesis holds that our Moon was born of a calamitous giant impact. Shortly after the planets in our solar system formed, 4.5 billion years ago, Earth was a very different place, glowing red with rivers and seas of lava. 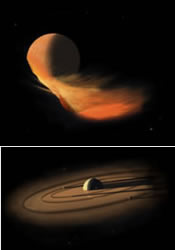 Its remains were blown into space or incorporated into the Earth. The core of the colliding object combined with the Earth’s dense core.

Over a short time — perhaps a hundred years or less — the ring of vapor, dust, and molten rock clumped (accreted). The largest clumps attracted more and more particles, growing larger faster and faster to form our Moon. Just after its birth, the Moon was 15 times closer to Earth and Earth's day was only six hours long!

Further details about the Moon’s evolution are available on the poster “How Our Moon Formed”.

The Giant Impact Story Is an Unfolding Tale

The Moon's characteristics are best explained by the current leading scientific model of the Moon's origin — the Giant Impact hypothesis.

The Giant Impact hypothesis is the leading framework for explaining the current scientific evidence, but there are many unanswered details. The NASA Solar System Exploration Research Virtual Institute team at the Southwest Research Institute is using powerful computer models and information about the chemistry of early Earth and Moon rocks to help determine how the Moon formed and evolved into the Moon we see today.

The Moon's Childhood of Turmoil

Infancy: Differentiation — Like all terrestrial planetary bodies, the Moon underwent a process of differentiation early in its history. Its bulk settled into layers: the heavier iron sank, forming a small core. The Moon's oldest rocks likely formed in an ocean of liquid rock — a magma ocean.

When the Moon formed, it was enveloped by a deep ocean of molten rock.
Credit: Lunar and Planetary Institute.

Differentiation within the magma ocean produced the features we still see on the Moon today. The uppermost part of the Moon's crust is mainly the rock anorthosite, which forms the "lunar highlands," the brighter, light-colored, heavily cratered regions we see on the Moon. (For more information see the exhibit Our Molten Moon.) 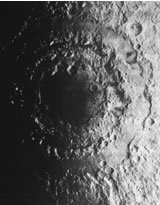 Young Moon: Big Impacts Form Big Basins —For the first 600 million years of its existence, large asteroids and comets continued to strike the Moon and the planets in our solar system — including Earth. These impacts are recorded as the largest gouges on the Moon, including the large circles that were later filled in with darker rock. By about 3.8 billion years ago, much of the debris in the solar system had been swept away, and impact strikes were smaller and less frequent. 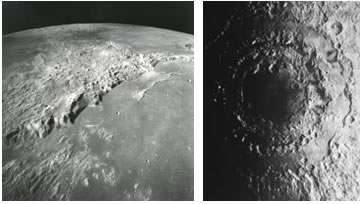 Early large impacts produced deep basins such as Orientale, up to 1000 km across and surrounded by high rings of mountains, visible as prominent circular structures on the Moon. Credit: NASA.

The details of this rain of planetary debris are a mystery. Lunar scientists are investigating whether this intense bombardment occurred in several waves, one massive storm, or spread out over a long period of time. 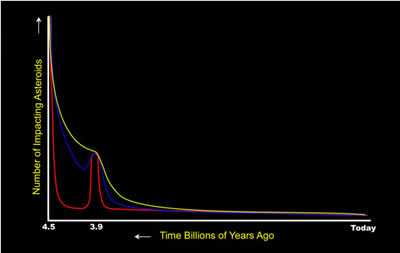 Some scientific evidence suggests an intense storm of impacts, which peaked 3.9 billion years ago, called the Late Heavy Bombardment or Lunar Cataclysm. (For additional information, see the exhibit A Storm of Asteroids.)

The first evidence of life on our planet appears in the geologic record at the very end of the heavy impacts; scientists are studying the effect this downpour of asteroids had on our own planet and its possible role in the formation and evolution of life. (See the exhibit Impacts: Delivering Death and Fostering Life for more information.)

Teenage Angst: Lunar Volcanism – While cool on the outside, portions of the Moon's interior were still hot. Pockets of hot mantle material slowly rose to the surface, melting at lower pressures, then flowing onto the lunar surface through cracks in the lunar surface. The magma flooded across the lowest regions to fill the impact basins. It cooled quickly, forming basalt, a dark volcanic rock. 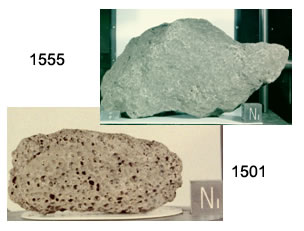 These lunar volcanic rocks are 3.3 billion year old basalts. The rock in the lower image contained gas, which formed the round holes known as vesicles. Credit: NASA 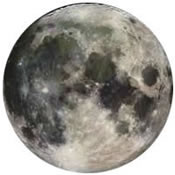 The large, smooth, dark regions we see on the Moon are the basaltic "lunar maria." They have fewer craters than the lunar highlands, indicating they are younger. Mare basalts have been radiometrically dated to be between 3.0 and 3.8 billion years old.

Adulthood: Ongoing Impacts and Human Exploration — For the last one billion years, our Moon has been geologically inactive except for occasional meteoroid impact.

Further details about the Moon’s evolution are available on the poster “How Our Moon Formed”.

The data returned by orbiting spacecraft such as the Lunar Reconnaissance Orbiter, and the Apollo program reveal much about the formation and evolution of our Moon and, in turn, of our own Earth. Erosion and plate tectonics on Earth have obscured our planet's early geological history. The Moon holds the best-preserved record of our solar system's early history and the processes of formation, differentiation, and bombardment which shaped all terrestrial planets. New missions are helping scientists to piece together details of the history and evolution of the Moon, and of our Earth).

The presentations on this page are those made by NASA scientists and are intended to provide background information for program providers. These external resources are not necessarily 508 compliant.