The Moon's Influence on Us 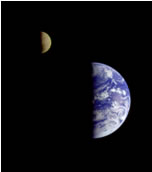 Length of Day – Early Earth was spinning at a much faster rate: according to computer models, Earth had a six-hour day 4.5 billion years ago! Since then, with the help of our Moon, Earth has been slowing down and our days have been getting longer. Evidence includes growth rings in fossil corals and shells and ancient photosynthetic bacteria layers, called stromatolites. Stromatolites living 850 million years ago record a day length that was about 21 hours long. Fossil corals from 400 million years were living on an Earth with 22-hour days.

Over time, the Moon's gravitational pull on the Earth "stole" some of Earth's spin energy, launching the Moon slowly into higher and higher orbits. [The Apollo laser experiments confirmed that the Moon is moving away at the rate of two inches (five centimeters) per year.] The distance between Earth and Moon increased and the spins of both decreased. Today, Earth spins once every 24 hours.

Today’s more distant Moon takes over 27 days to complete one full orbit around Earth. Just like Earth, our Moon rotates on its own axis and experiences daylight and dark cycles. Our Moon's day and night cycles are longer than Earth's — the Moon spins on its axis once every 27.3 days. The Moon takes the same amount of time to spin around once as it does to orbit completely around Earth. This means that Earth observers always see the same side of the Moon (the nearside). The side we do not see from Earth (the farside) has been mapped during lunar missions. 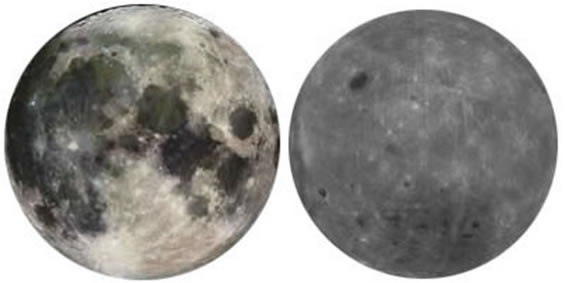 Stable Seasons – The giant impact that formed the Moon may have tipped the Earth a little and contributed to the 23.5° tilt of our North Pole away from "straight up." This tilt gives us our seasons. (For more information about seasons, see SkyTellers About Our Seasons.)

The very presence of the Moon helps to keep this tilt relatively stable The Moon's gravitational pull acts like training wheels for Earth on its journey around the Sun. It keeps Earth’s axis pointed at a consistent angle. Without the Moon, the Earth's stately progression through spring, summer, fall, and winter would have fluctuated widely over eons.

Tides – The Moon's gravitational pull tugs on Earth — especially the portion that is nearest to the Moon. Earth's crust rises slightly (several centimeters) due to this force. Ponds and lakes — such as the Great Lakes — experience small tides, as well. Earth's oceans (and atmosphere), however, are free to lift many feet in response this tug. As the Moon orbits the Earth, it drags along behind it a "bulge" in the oceans. On the side of Earth opposite the Moon, the gravitational pull is less than on any other part of the Earth and the oceans are "left behind" in another bulge.

The Moon's contribution to Earth's tides is significant because it is so close. The Sun, of course, also exerts a powerful gravitational pull on Earth — that's what keeps Earth in a steady orbit. Earth's oceans are pulled toward the Sun, but the difference between Sun's gravitational pull on Earth’s near side and far side is much less; the Sun’s gravity contributes only about a third of the tides’ height.

Early in Earth's history, the Moon was even closer to Earth. Billions of years ago, the Moon was 10 times closer and tides were 1000 times higher. Scientists believe that these extreme tides occurred once every three hours because the Earth was spinning more rapidly. The tides eroded the coastal areas, adding minerals to the oceans. These minerals may have been essential for life to evolve as quickly as it did.

Shining Light – Just like the planets, our Moon does not produce its own light. It "shines" because it reflects the Sun's light. While careful statistical studies have shown no correlation between the full Moon and strange behavior, the full Moon's light does make it easier for humans and other animals to see — and be seen. Studies have documented changes in the success rates of predators and foraging patterns of prey animals due to this added nighttime illumination. Corals time their mating events by the light of the Moon. Most other animal behaviors relating to the Moon are because the tides change the coastal environment.

The Size of It – Despite the exaggerated size of the Moon in movies, books, and art, the Moon's apparent size is relatively small in the sky. Nearly everyone has experienced the illusion that the Moon's appearance is magnified on the horizon. However, it takes up about the same number of degrees in the sky when it is near the horizon and straight overhead.

Changing Shape – The changing appearance of the Moon has inspired stories, songs, poems and words (e.g. "month"). It is used to keep time (e.g. lunar calendar). Our Moon's shape doesn't really change; the "amount" of Moon that we see as we look from Earth changes in a cycle that repeats about once a month (29.5 days). For information about the lunar phases, see SkyTellers About Our Moon.

Nearby Stepping Stone to the Cosmos – The Moon has sparked revolutions in scientific thought. Galileo’s telescopic view of the moon’s rough surface challenged the long-held belief of the heavens as the realm of perfection. The Moon rocks brought back by the Apollo astronauts unlocked the origin of craters — not only on the Moon, but on Mercury, Venus, and Mars — from impacts rather than volcanos. They also overturned existing hypotheses of the Moon's formation and led to the Giant Impact hypothesis as the predominant explanation of its beginnings.

Many astronomers, geologists, planetary scientists, engineers, and astronauts owe their productive careers to childhood memories of the Moon. What other great personal, cultural, and scientific achievements will the Moon inspire next?

Thanks to the Moon
What if the giant impact had not occurred? How would Earth — and life itself — be different without the Moon?

The presentations on this page are those made by NASA scientists and are intended to provide background information for program providers. These external resources are not necessarily 508 compliant.