What is erosion?
Erosion is the breakdown and movement of a planet's surface by the action of gravity, running water, waves, currents, ice, and wind. Erosion gradually wears away landforms. Planetary scientists often compare the relative ages of craters by looking at how worn their features appear.

Which planets have wind erosion?
In order to have erosion by the wind, a planet must have an atmosphere. An atmosphere is the envelope of gas molecules surrounding a planet. Wind is caused by the movement of these molecules. Wind can move dust and sand-sized particles, transporting them from one place to another. The particles that it carries can act like sandpaper — slowly wearing down and polishing rocks in its path.

Earth, Venus, and Mars all show signs of wind erosion today. Particles are blown into waves — from the tiny sand ripples seen by the Mars rovers to giant dunes seen on images from orbiting spacecraft. Dunes are seen on the surfaces of all three planets. Mars also has the largest dust storms in our solar system; we can observe these through telescopes from Earth. The largest of the dust storms can cover all of Mars for several months at a time!

Dunes on the floor of Endurance Crater, imaged by NASA's Mars rover, Opportunity. The features are less than 1 meter (3 feet) high and show that wind has blown material around on the surface of Mars.

What about erosion by water?
Earth is the only planet we know of with liquid water at its surface. We use the features on Earth that we know are carved by water as examples of what to look for on other planets for evidence of past water. Mars is the only other planet that has features that look like they were eroded by water flow. The features look like drainage networks in some cases. In others, they look like features carved in huge floods. 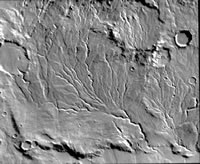 Image courtesy of the Lunar and Planetary Institute, from the Mars Digital Image Map. 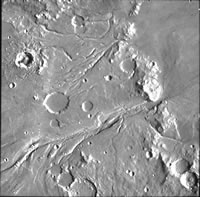 Outflow channel system on Mars. These channels are much larger than the drainage networks observed on Mars and Earth. Scientists think they were carved by huge floods that drained into the lower northern regions of Mars. The area displayed is 225 kilometers (140 miles) across.

Image courtesy of the Lunar and Planetary Institute, from the Mars Digital Image Map. 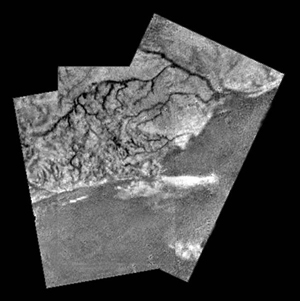 The mysterious terrain of Titan was unveiled as the Huygens Probe descended to its surface in January 2005. Dark channels cross the surface, creating drainage patterns that look similar to those of Earth’s surface. Titan’s channels, however are believed to have been formed by the flow of liquid methane rather than water.

This is a mosaic of three frames from the Huygens Descent Imager/Spectral Radiometer instrument. Image (PIA07236) courtesy of the European Space Agency, NASA, the Jet Propulsion Laboratory, and the University of Arizona.