What is tectonism?
Tectonism is the faulting or folding or other deformation of the outer layer of a planet. It happens very slowly, on the scale of millions of years. Tectonic activity is caused by heat loss; all the terrestrial planets passed through a molten (or nearly molten) stage early in their development and they have been cooling ever since. As they have cooled, they have formed a strong outer layer — the lithosphere. Continued movement of hot material in the interior of the planet causes the surface to deform. The lithosphere may rise up or it may break and ride over itself. Each planet has a unique history and unique tectonic features. Large planets, such as Venus, Earth, and Mars, are large enough to have remained hot inside and still have active tectonism. Smaller bodies, such as the Moon and Mercury, have cooled further and are not thought to be presently active, but their features tell geologists of an active past.

What tectonic processes are happening on Earth?
Earth is unique among the planets in that its outer surface — the lithosphere — is divided into several rigid plates. These plates move. In some cases they move toward each other, in some cases away from each other, and in some cases, the edges move alongside each other. Exciting geologic events — volcanic eruptions and earthquakes — happen where plate edges meet!

Geologists call the type of boundary where plates move away from one another a divergent boundary. Where the plates pull apart completely, magma fills the gap, forming new crust. New crust is forming along the mid-ocean ridge, a 70,000-kilometer-long (43,000-mile-long) volcanic mountain chain that runs through our deep oceans.

The boundary where two plates collide is called a convergent margin. In some cases one plate slides under the other (a process called subduction). Deep earthquakes occur in these regions. Subduction causes melting deep below Earth's surface, and creates pools of magma. Some of this magma eventually reaches the surface and erupts as volcanos. This volcanic mountain chain marks the boundary between the plates. The Ring of Fire — the ring of volcanic mountains along the rim of the Pacific — is an example of this type of collision. In other cases the rocks are faulted, folded, and stacked on top of each other forming massive mountain chains. Mountain chains, such as the Rockies or Himalayas, are the result of this tectonic activity.

Click on the image for a larger version
Cartoon courtesy of the U.S. Geological Survey.

A transform margin forms where two plates move alongside each other. The San Andreas Fault in California is the most famous example of this type of boundary. Transform boundaries usually do not have volcanos, but they are marked by severe earthquakes.

Why does Earth have plate tectonics?
Heat! When you take a cake out of the oven, it slowly cools. Earth, and the other terrestrial planets, started out very hot. Through time, they have cooled. The heat from the interior is slowly transported from the center to the surface, where it is lost from Earth. In Earth's case, much of this transfer occurs by a process called convection. Hot material rises from the interior of the Earth, carrying the heat with it. It rises because it is less dense than the cooler material around it. As it gets close to the surface, the material cools — releases its heat — and slowly descends back toward the center, where it heats up and rises again. While Earth's interior is hot, most of it is not molten! Rock under high pressures and temperatures — such as those found in Earth — can slowly flow. The convection currents in Earth's interior move the rigid plates across Earth's surface. Tectonic deformation and earthquakes mostly occur at the boundaries between these plates.

Are there tectonics on other planets?
Like Earth, Venus and Mars are believed to have hot interiors. This means that they are continuing to lose heat. While their surfaces show evidence of recent deformation — tectonism — neither planet has plate tectonic activity because neither planet has a surface divided into plates.

Mars is a smaller planet than Earth; it has cooled more, much like a small glass of hot water would cool faster than a large glass of hot water. The outermost layer of Mars is thick, thick enough to support the tallest volcano in the solar system. Much of the tectonic activity on Mars is believed to result from convection in its interior. However, the convection appears to be restricted to a few locations. Hot material may be rising from the interior toward the surface in these locations, causing the surface to bulge, stretch, and crack. The largest of these areas is the Tharsis Bulge. Valles Marineris is a large rift, where the surface has split apart in one of these stretched regions.

Venus also shows evidence of tectonic activity, where the surface has been, in some locations, stretched and broken, and in other regions, crumpled. Scientists are debating the type of deformation that may be occurring in Venus' interior and how it may relate to the features observed on this planet's surface.

Mercury and the Moon are no longer tectonically active. The Moon is believed to have been inactive essentially for the last 3 billion years; Mercury has been inactive since about 3.7 billion years ago. However, there are hints of past tectonism. Both bodies have faults where the surface has been broken and pushed on top of itself by compressive forces. In the case of Mercury, the entire planet appears to be covered with a network of these ridges, some over 300 kilometers (185 miles) long, suggesting that Mercury contracted slightly as it cooled. 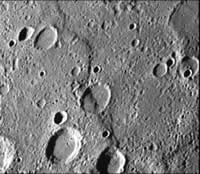 Mercury's surface showing numerous impact craters and a ridge — Santa Maria Rupes — running from the bottom middle of the image toward the upper left. The ridge marks a fault created by compressive forces. The image is about 200 kilometers (125 miles) across.

Europa and Ganymede, moons of Jupiter, have icy crusts that may cover deep oceans. The ice is broken into plates that act a little like Earth's tectonic plates. In places the plates have slid past each other. In other regions they have ridden over each other. In some locations the ice floes have moved apart, creating a gap that has been infilled by younger ice. 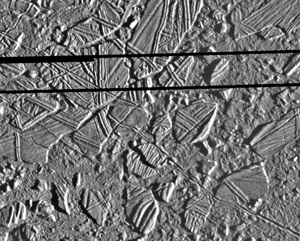 This image of Europa's icy surface covers an area 34x42 kilometers (21x26 miles) across and shows numerous lines across the surface. These are faults where the ice shell has been broken and moved by forces inside Europa.