What is volcanism?
Volcanism is the eruption of molten rock (magma) onto the surface of a planet. A volcano is the vent through which magma and gases are discharged. Magma that reaches the surface is called “lava.” Volcanos are named for Vulcan — the Roman god of fire!

Why and where do volcanos form?
Volcanism is the result of a planet losing its internal heat. Volcanos can form where rock near the surface becomes hot enough to melt. On Earth, this often happens in association with plate boundaries (check out the section on tectonism). Where two plates move apart, such as at mid-ocean volcanic ridges, material from Earth's interior slowly rises up, melts when it reaches lower pressures, and fills in the gap. Where one plate is being subducted under another, chambers of magma may form. These magma bodies feed the volcanic islands that mark subduction zones.

Although most volcanic activity takes place at plate boundaries, volcanism also can occur within the plate interiors at hotspots. Hotspots are thought to be from large “plumes” of extremely hot material rising from deep in Earth's interior. The hot material rises slowly, eventually melting as it reaches lower pressures near Earth's surface. When the material erupts it forms massive lava flows of fine-grained dark volcanic rock — basalt. The broad, gentle shield volcanos of Hawai'i come from a hotspot.

What do Earth's volcanos tell us?
The fact that Earth has volcanos tells us that Earth's interior is circulating and is hot — hot enough to melt. Earth is cooling; volcanos are one way to lose heat. The pattern of distribution of volcanos on Earth gives us a clue that Earth's outer surface is divided into plates; the chains of volcanos associated with mid-ocean ridges and subduction zones mark the plate edges. Other planets have volcanic features — some recently active — telling geologists that they, too, are losing heat from their interiors and that there is circulation. However, these planets do not display the pattern that Earth's volcanos do.

What evidence is there of volcanism on other planets?
Moon:  Our closest neighbor has small volcanos, fissures (breaks in the crust), and extensive flows of basalt, a fine-grained dark volcanic rock. The large dark basins that you can see on the Moon are the maria — areas of these lava flows. However, all these volcanic features are old. There are no active volcanic features on the Moon. Most of the volcanic activity took place early in the Moon's history, before about 3 billion years ago. The most recent lava flow occurred about 1 billion years ago. 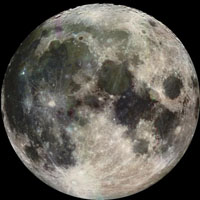 Dark regions on the Moon are lunar maria. These are low, smooth regions of dark, fine-grained volcanic rock — basalt. 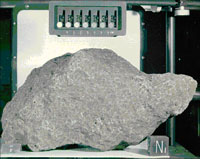 This rock sample was collected by the Apollo 15 mission in 1971. It is a basalt, a type of rock that solidifies from a volcanic lava. This particular basalt formed 3.3 billion years ago and is similar to basalts formed at volcanos such as Hawai'i on Earth.

Mars:  Mars has volcanic features that are similar in shape to those on Earth, although much larger. There are large shield volcanos — like those in Hawai'i — that contain 100 times more mass that those on Earth. Olympus Mons is the tallest volcano in our solar system. It is 22 kilometers (14 miles) tall, compared to Mauna Loa's 9 kilometers (almost 6 miles). It is 600 kilometers across (375 miles), which is large enough to cover the state of Arizona! Several of the volcanos on Mars, including Olympus Mons, occur in the Tharsis region; the magma for the volcanos may come from hot material welling up in plumes from deep in Mars' interior. Many scientists consider Mars to be volcanically active, even if we have not observed an eruption. Basalt meteorites from Mars indicate that volcanism has occurred in the last 180 million years. Very few impact craters occur on the lava flows of Olympus Mons, suggesting that this volcano has probably erupted in the last few million years. 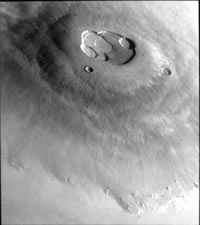 Venus:  Venus has more than 1700 volcanic features and many of these look fresh — unweathered. Much of the surface of Venus has been covered by huge flows of basalt lava, probably in the last few hundred million years. This blanket of lava completely covered the surface features, such as impact craters. The fact that only a few craters dot the surface provides evidence of the recent nature of this resurfacing. 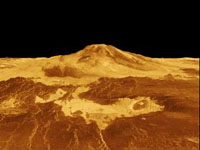 Image courtesy of NASA and the Jet Propulsion Laboratory.

Io:  Jupiter's innermost moon, Io, is the most volcanically active body in our entire solar system! NASA missions imaged massive plumes shooting hundreds of kilometers above the surface, active lava flows, and walls of fire associated with magma flowing from fissures. The entire surface of Io is covered with volcanic centers and lava flows, which have covered all of its impact craters. 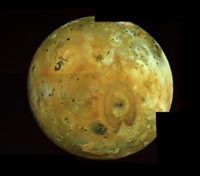 Image courtesy of NASA and the Jet Propulsion Laboratory. 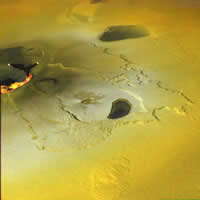 The Galileo spacecraft captured this image of an active volcanic eruption on Io in 2000. The bright orange region is hot lava. This false-color picture is about 250 kilometers (about 155 miles) across.

Image produced by the University of Arizona, courtesy of NASA.