These hands-on space science activities relate to simple concepts and will take a short amount of time, or can be done as a demonstration.  They can be extended through discussion. 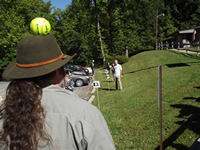 Jump to Jupiter
Children explore a scale model of the solar system, counting the number of jumps to each planet.

A Trip to Mars
Children play a game using posters and dice that steps through a human mission to Mars, to learn about the variety of people on the ground supporting missions, and the factors that can affect a mission outcome.

Investigating the Insides
Children make observations of mystery “planets” to infer their composition and structure.