From Your Birthday to Jupiter's

Permission to use the "Solar System" chapter of SkyTellers was provided by Lynn Moroney and Joseph Bruchac.

Children explore their origins through three stories. First, they model their own lifetimes by tying knots in lengths of yarn to represent key events in their pasts. Then, they act out a cultural story of our origins. Finally, they explore Jupiter's story by modeling a timeline from today back to its "birthday." They use the timeline to visually demonstrate that the Big Bang occurred much earlier in the past. Children will discover how the Juno mission to Jupiter will help unveil how our solar system — including Earth — came to be. This 1-hour activity is appropriate for children ages 11 to 13. 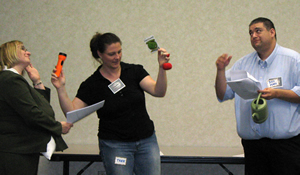 1. Provide each child with a length of yarn and explain that it will represent a timeline of his or her life. Have a discussion with the children about their pasts, and invite them to tie knots at key points in their life stories.

Facilitator's Note: The children may need assistance in estimating the distance along the timeline to place their knots. Depending on the age of each child, one year will be represented by slightly more or less than one inch.

Stories record the events of our lives, and they also describe our much more distant past. Discuss how no one was around to tell us the origins of people or Earth, but all cultures have stories about our beginnings.

2. Invite the children to tape their yarns into their journals and note what the events the knots represent.

3. Have the children listen to and act out the cultural origins story. Invite 11 volunteers to "ham it up," but ask them to respect the culture that created the story in their interpretations. Provide the silly props and ask the children to assume the roles in the story and perform appropriate motions as their characters are mentioned. Suggestions are provided in their journals.

4. Explain to the children that they will investigate Jupiter's own story — much like they did with their own stories earlier in the activity — but with a MUCH bigger string! Ask for two or more children to stretch out the first 40 feet of butcher's twine (they may need to stand along the walls of the room in order to get the entire length to fit). One child should hold the end of the twine with the attached "Today" sign facing outward. The other should hold the twine at the knot with the attached "Jupiter's Birthday" sign facing outward. Coil the remaining twine next to his or her feet.

Birthday Celebration!: You may wish to invite the child with a birthday nearest the day's date to hold the "Today" end of the twine. Have him or her wear a birthday hat! On the "Today" sign, write the person’s name and how old he or she is (or will be on his or her birthday).

5. Show the children the "Big Bang" sign at the beginning of the coil, then explain that scientists understand that the universe began from an immense explosion long, long ago (14 BILLION years ago). Emphasize that Jupiter and the other planets formed much later. Just as their brothers and sisters can tell stories about their own early childhoods, Jupiter helps us understand our own history — the length of twine between "Jupite's Birthday" and "Today."

6. If desired, write down the children’s ideas about the different events on the timeline.

Facilitator’s Note: You may wish to clarify some terms:

7. Congratulate the children on modeling a timeline of the entire history of the universe! Have everyone return to their seats.

8. Invite the children to keep Jupiter's timeline in mind as they watch an animation of Jupiter — and the other planets — forming from a cloud of gas and dust about 4.6 billion years ago. Following the animation, discuss the concepts it explored (these will depend on the animation you have selected to watch).

Facilitator's Note: Our Sun and the solar system formed from a huge, slowly rotating molecular cloud made of hydrogen and helium molecules and dust. Under its own gravity, the cloud began to compress. As it compressed, it spun faster and faster, like an ice skater who spins faster as he pulls his arms in closer to his body. The spinning flattened the material into a giant disk. Most of the mass was concentrated at the center of the disk, forming a gas sphere. The sphere continued to attract material from the disk. As new material was added, the sphere compressed, increasing the temperatures and pressures until they were sufficient to fuse atoms in the very center of the sphere — and at that point a star — our Sun, was born. The planets and other components of the solar system formed from the remainder of the disk. By exploring our universe with tools such as the Hubble Space Telescope, scientists have discovered stars in various stages of formation. This helps them understand how our Sun may have formed.

9. Invite the children to create a birth certificate for Jupiter, Earth, and themselves. Have them ask an adult or older sibling at home if they need help filling in the details about their birth weights.

Scientists gather clues about our origins by observing our Sun, the planets, and comets and asteroids — not unlike asking a parent or older sibling for stories about being born! Astronomers are also able to observe other, more distant stars forming in other solar systems. They learn what our own beginnings were like by watching others being "born." Gigantic Jupiter formed alongside the other planets in our solar system, and still contains the materials from the cloud of gas and dust that developed into the Sun and inner and outer planets. The Juno mission to Jupiter will arrive at Jupiter in 2016. It will measure some of these materials in Jupiter’s atmosphere, including one very important clue: water. These observations will help scientists fill in the details of our solar system's formation story. (Children who participated in the Weather Stations: Clouds activity may recall hearing about Juno’s hunt for water deep in Jupiter’s atmosphere.)

If possible, build on the children's knowledge by offering them a future Jupiter's Family Secrets activity. The children may wrap-up their investigations of Jupiter by attending the concluding activity, My Trip to Jupiter, where they create scrapbooks to document their own journeys into Jupiter’s deepest mysteries! Alternatively, they may take on the more challenging investigations in the Explore Jupiter’s Family Secrets module.