Children ages 8 to 13 help create and then navigate an outdoor course of the traditional "planets" (including dwarf planet Pluto), which are represented by small common objects. By counting the jumps needed to reach each object, children experience firsthand the vast scale of our solar system. The children's posters from Jump Start: Jupiter! may be used to construct the course. 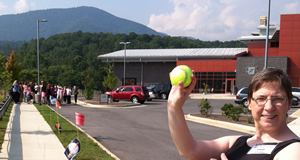 1. Explain that the children will be creating a scale model of the solar system.

We use models to help us represent objects and systems so that we can study and understand them more easily. By "a scale model" in this case, we mean a model that has smaller parts but parts that are relatively the same size and distance to each other as the real planets, dwarf planets, asteroid belt, and Sun.

3. Have the volunteers line up in the order of the planets from their distance from the Sun.

Explain that their objects are 10 billion times smaller than the actual planets! Even so, an entire large yard or football field would be required to hold this model of the solar system out to the orbit of the dwarf planet Pluto.

Facilitator's Note: You may wish to have older children calculate the scale of this solar system model for themselves. Provide the children with the solar system objects' actual sizes and distances from the Sun, which is summarized in Family Portrait...in Numbers. After dividing the figures by 10 billion, the children may wish to convert them to more commonly used units. The following conversion factors may be helpful:

4. Have the children navigate the solar system course! Distribute Journals or the "Jump to Jupiter" pages and pencils or pens. Ask the children to count and record the total number of (one-meter) jumps from the Sun it takes to get to each marker. Provide the meter- or yard-stick for the children to practice jumping that length.

5. Guide the children as they discover distance, size, and interesting facts about a solar system object at each stake. Ask the children to start counting with the number at which they left off (i.e., count six jumps to Mercury, then count from six until they reach Venus at eleven jumps, etc.). Have them note the size of each marker representing a planet.

Remind the children that the planets are in motion as they orbit the Sun. Only rarely do several planets "line up." Have them imagine the circles that each planet would trace! Or, if desired, invite a few children to carry a selection of planet models in large circles around the "Sun" to demonstrate their orbits.

Facilitator's Note: One common misconception among children is that the planets are often, or even occasionally, lined up in a row. Those planets closest to the Sun — Mercury and Venus — orbit faster than Earth and do frequently line up with the Earth and with each other, but it takes many hundreds of years for distant giant planets like Uranus and Neptune to line up with each other. Chances are that in the entire history of our solar system, the planets have never all been lined up.

Part of this answer depends on the type of spacecraft and if it is doing other things like circling other planets. In general, if it was possible for a spacecraft to fly directly to Mercury, it would take it about 51/2 months to get to there if it was going in a straight shot. The MESSENGER spacecraft, launched in 2004, arrived at Mercury in 2011; MESSENGER had several flybys of other planets to help it slow down so that it was able to go into orbit around Mercury. New Horizons, launched in 2006, is expected to reach the dwarf planet Pluto at the "other end" of our solar system in 2015! Due to a gravitational assist from Jupiter, New Horizon's trip has been shortened by three years.In 2016, the Juno spacecraft will arrive at Jupiter. Juno launched in 2011, and like MESSENGER, it will have a flyby that slings it past Earth (in 2013) on its way to the giant planet.

If possible, build on the children's knowledge by offering them a future Jupiter’s Family Secrets activity. Invite the children to return with their families to see the planets of our solar system for themselves in Planet Party.