In this 45-minute activity, children ages 8 to 13 build edible models of Jupiter and Earth to compare their sizes and illustrate their internal layers. They discuss how the Juno mission will infer details about Jupiter's interior by measuring its gravity field and magnetic field. 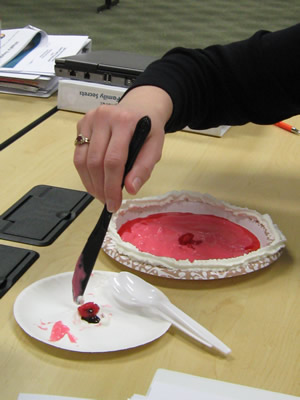 For each team of 2 to 4 children (or for each individual child if you prefer that they make their own planets):

1. Introduce the activity by dividing the children into teams of three to four and explaining that each team will create edible models of Jupiter and compare them to edible models of Earth. Invite them to share what they know about Jupiter:

2. Before you begin, explain to the children that this is a fun and tasty — but messy — activity! Have them wash their hands before they start and remind them to not lick their fingers while they are working on their models. For now, they will just make the model — they will be invited to eat them at the end of the activity!

3. Create a model of Jupiter! Provide the materials to the teams and invite them to follow the recipe in their journals, using A Peek into Jupiter's Interior for guidance. Ask them to slice their cherries in half and reserve one half for their Earth models. Have them note that the model will represent a slice of Jupiter through its middle.

4. Create a model of Earth! Provide the materials to the teams and invite them to follow the recipe in their journals, using A Peek into Jupiter's Interior for guidance. Have them note that the model will represent the Earth, sliced in half to reveal its interior.

5. Invite the teams to examine the cross sections of their planets.

Facilitator's Note: With older children, continue with a deeper discussion comparing the structure and composition of Jupiter and Earth, as outlined in step 6.

6. With children ages 10 to 13, discuss how scientists study the unique interiors of Jupiter and Earth.

While Earth's magnetic field protects us on the surface, it poses a danger to spacecraft that travel beyond Earth. The magnetic field traps radiation in the region of space surrounding Earth. Likewise, the area around Jupiter is filled with high levels of radiation. Much of the sensitive electronic equipment onboard the Juno spacecraft is housed behind titanium shielding to protect it. The spacecraft’s highly elliptical orbits will take it close to Jupiter's upper atmosphere, then direct the spacecraft to a safer distance and minimize the time spent in high–radiation areas. Even with this protection and careful planning, the spacecraft will slowly deteriorate as it orbits Jupiter. Over the course of 15 months, Juno will experience radiation that is equivalent to more than 100 million dental x–rays. Its electronics will eventually fail, but it is hoped that they will have collected data from a region of space where no humans can safely explore.

Add that the pressure of a planet's mass also crushes its internal layers, and some types of materials even become solid under those temperatures and pressure. The interiors of the Earth and Jupiter are not completely molten. The combination of composition, temperature, and pressure determine whether a layer is liquid or solid.

Facilitator's Note: The children may have many misconceptions about Earth's interior. They may believe the crust floats on a molten layer, but as modeled in this activity, only the outer core is liquid. Pieces of Earth's crust do move on top (giving rise to earthquakes), but they are riding a layer of ductile solid rock.

Ask the children to record the secrets they unlocked today in their journals with drawings and notes about their Jupiter and Earth models. Break out the spoons and enjoy the treats!

If possible, build on the children's knowledge by offering them a future Jupiter's Family Secrets activity. Invite the children to attend the next program, Weather Stations,  to discover how Jupiter's "whipped cream" atmosphere holds turbulent weather and mysterious clouds.