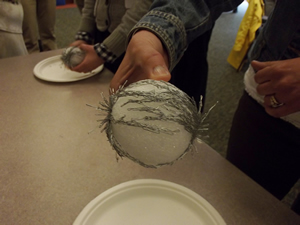 Neato-Magneto Planets is a 45-minute activity in which teams of children, ages 11 to 13, have the opportunity to do their own planetary investigations. The teams study magnetic fields at four separate stations: examining magnetic fields generated by everyday items, mapping out a magnetic field using a compass, creating models of Earth's and Jupiter's magnetic fields, and observing aurora produced by magnetic fields on both planets.

These concepts involve more advanced science than previous activities in Jupiter's Family Secrets, and they explore more deeply the science of the Juno mission and the rich information it will return to us. Facilitators who choose to undertake this activity should have a firm grasp of the scientific basis so that misconceptions are not introduced to the children.

1. Tell the children that they will be investigating magnetic fields. Invite them to share what they know about this topic.

Add that while magnetic fields are invisible, they can be measured by the force the field exerts on other magnetic materials.

Facilitator’s Note: The children may have mistaken ideas about magnetism. They may think that magnetism needs to be transmitted through a medium. However, magnetism can travel through a vacuum and indeed, Jupiter's strong magnetic field stretches far into the void of space. This activity builds on basic concepts of magnetism that the children may have already encountered, but assess their level of understanding as you introduce the activity and adjust your explorations accordingly.

3. Share with the children that they are going to investigate magnetic fields! Divide the children into teams of two to four. Each team will visit four stations. Allow approximately 10 minutes for each station and let the teams know when it is time to rotate (perhaps by ringing a bell). Have them follow the instructions for each station provided in their journals; they will also need their pencils to record their observations and hypotheses. While the children are working, the facilitator should visit the different stations to see if the children are having any difficulties. If there are assistants available, they should remain at their tables to help the children.

Facilitator's Note:  Have the children use caution when experimenting with magnets! They should not be brought near computers, computer monitors, audio tapes, or other magnetic devices.

At station 2, the children use a compass to map the magnetic field lines of an Alnico bar magnet. Credit: NASA.

At station 3, the children will trace the three-dimensional magnetic field lines surrounding model planets with clamped staples, which are magnetically attracted to magnets embedded in the Styrofoam balls.
Credit: Lunar and Planetary Institute.

4. After the children have finished at all the stations, invite them to share their findings. Discuss each station separately:

Facilitator's Note: Magnetic fields are properties of magnets, but they are also created by current moving through an electric circuit or flow within liquid metallic interiors of certain planets.

Explain that Juno will map Jupiter's magnetic fields. Scientists can also observe phenomena related to the magnetic field of Jupiter: images and radio emissions of Jupiter’s northern and southern lights, or aurora.

Share Earth's and Jupiter's Magnetic Fields with the children and invite them to compare their own investigations with the photos.

Add that Jupiter's magnetic field is also stronger because the planet spins so fast (its day is 10 hours long, compared to Earth's 24-hour day). Explain that the Juno mission to Jupiter will use a sophisticated instrument (called a magnetometer) to map Jupiter's magnetic field. This information will help scientists infer details about the liquid metallic hydrogen layer that generates its magnetic field. Juno will also take photographs of Jupiter's aurora.

If possible, build on the children's knowledge by offering them a future Jupiter's Family Secrets activity. Invite the children to return for the next activity and discover how Juno's suite of instruments will provide clues about our solar system's formation in From Your Birthday to Jupiter's.

In order to complete its mission — including measurements of the magnetic field — Juno must be protected. Juno's instruments were designed to specifically withstand Jupiter's radiation long enough to take critical measurements. Most of Juno’s instruments are housed behind titanium shielding to protect them from radiation. Even so, there will be degradation of some instruments toward the end of the mission.

For more information about the instruments onboard the Juno spacecraft, visit http://www.nasa.gov/mission_pages/juno/spacecraft/.