Adapted from "Make It Rain!," Windows to the Universe Original (now stored at http://www.windows2universe.org/), at the University Corporation for Atmospheric Research (UCAR), ©1995–1999, 2000.

Children observe the water cycle in action! Water vapor in a tumbler condenses on chilled aluminum foil — producing the liquid form of water familiar to us as rain and dew. They discuss how Jupiter's lack of a surface simplifies its water cycle and consider that ammonia and ammonia compounds play a role in its more complicated atmosphere. 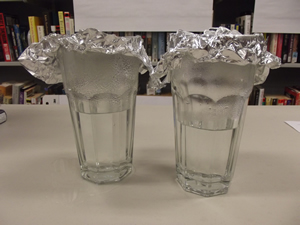 The following materials are for this Weather Stations activity.
Three sets are recommended for a station:

1. Use the containers of ice and water to prompt a discussion about state changes.

2. Explain to the children that they will observe the state change from water vapor to liquid water — condensation — that creates rain on Earth — and Jupiter!

3. Within a few minutes, observe drops falling from the aluminum foil. Ask the children to describe what happened.

Have them record the results in their journals.

4. Compare the model to Earth's and Jupiter's atmospheres.

Explain that while Jupiter doesn't have a surface like Earth does, its deep atmosphere is warmer than the upper reaches of its cloud layer.

5. Show the poster of Earth's water cycle to the children.

Add that scientists think that Jupiter has a layer of liquid hydrogen, but it does not have a solid surface with rivers and soil. Jupiter's rain evaporates back into vapor again when it falls to the deeper, warmer layers!

Summarize that Earth and Jupiter both have cycles of evaporation, condensation, and precipitation. Changes in temperature cause water — and in the case of Jupiter, other substances as well — to change phase and form vapor, clouds, and rain.

Juno will map the atmosphere's temperature at different depths from its orbit and gather information about the trace components water and ammonia. Scientists have been surprised to detect very little water during previous missions to Jupiter, and Juno's instruments will provide a deeper look into Jupiter's atmosphere on a hunt for the missing water. Explain that the information that Juno collects will also be used in computer models to better understand Jupiter's atmosphere.

Allow the children time to note their conclusions in their journals.