Adapted from "Activity 5–13: The Great Red Spot," in Eyes on the Sky, Feet on the Ground: Hands-on Astronomy Activities for Kids, Copyright© 1996 Smithsonian Institution and Storms on Jupiter, Lunar and Planetary Institute.

Children test how cornstarch and glitter in water move when disturbed. They compare their observations with videos of Jupiter's and Earth's storm movements. 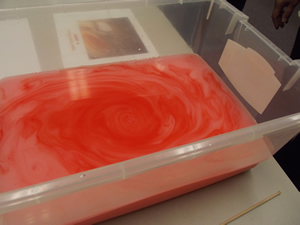 The following materials are for this Weather Stations activity.
Three sets are recommended for a station:

1. Introduce the activity with a discussion about Jupiter's distinctive appearance.

Explain that the bands that we see in Jupiter's atmosphere are clouds flowing past each other in different directions. Ask the children to discover what happens when Jupiter's clouds are pushed by these super-fast winds!

2. Ask the children to draw the results of the following demonstrations in their journals.

3. Optional: View the videos of Jupiter's and Earth's atmospheres.

Add that Jupiter's weather patterns are much longer-lived: centuries compared to about one week for a storm traveling on Earth. Earth's storms interact with the surface topography, but Jupiter has no surface — and therefore no continents or oceans — to alter its weather patterns.

Add that Earth's atmosphere is also shaped into bands by its spin, and these bands are called jet streams. Jupiter's faster spin creates stronger jet streams and there are many more of them!

4. Ask the children to draw or describe in their journals what they think a spacecraft entering the atmosphere of Jupiter might see and learn.

What measurements would the children make to better understand storms on Jupiter? They may have several ideas, such as temperature, wind speed and direction, and precipitation.

Facilitator's Note: While it orbits the Sun only once every 12 years, Jupiter spins on its axis once every 10 hours. The rapidly spinning planet generates five jet streams in each hemisphere that produce Jupiter's unique banded appearance. Earth has only about four dynamic jet streams, two — sometimes three — in each hemisphere, which all travel from west to east. Wind speeds are high, up to 330 miles (530 kilometers) per hour, and alternate direction from eastward to westward with latitude. The Great Red Spot is a massive storm system larger than the diameter of Earth that has been raging for at least several hundred years. Earth's highest surface wind speed ever officially recorded is 231 miles (372 kilometers) per hour, while the strongest winds on Jupiter reach 330 miles (530 kilometers) per hour.

Summarize that like Earth, Jupiter has storms that flow around the planet. Scientists have been watching Jupiter's storms for hundreds of years through telescopes and then recently, through cameras on spacecraft orbiting or flying by the planet. One hurricane in particular, called the Great Red Spot, has existed for that entire time. The Juno mission will measure the atmosphere's temperature and amounts of water and ammonia at different depths and "see" more deeply than any instrument has before. Scientists will use this information to understand how Jupiter can have such strong winds deep inside and how the bands are formed. Juno will also continue to document the appearance of storms as it orbits Jupiter, and children will work with scientists to take those pictures with JunoCam.