Children discover the relationship between temperature and pressure in the lower atmospheres of Jupiter and Earth. They chart the increasing temperature as they add pressure to a 2-L soda bottle with a Fizz-Keeper Pump. 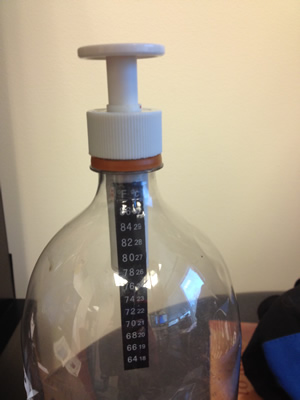 The following materials are for this Weather Stations activity.
Six sets are recommended for a station:

The Sun seems much closer to us when we are flying high in a jet airplane, but compared to the vast distance between the Earth and the Sun, that soaring height is insignificant. The top of the atmosphere is not warmed by being fractionally closer to the Sun. In the portion of Earth's atmosphere where we live and fly in jet airplanes, the temperature is higher where the pressure is highest: at sea level on Earth's surface. The temperature is lower at higher altitudes, such as on Mt. Everest or in the region where jets fly.

Above this familiar level, the composition of the atmosphere changes. The gases there are very efficient at capturing the Sun's energy, so the temperature spikes with this added heating.

1. Introduce the activity as an experiment to model what an imaginary spacecraft would encounter while descending through Jupiter's atmosphere. Ask them to first consider what Earth's atmosphere is like.

2. Explain that the children will be using an empty bottle to model how Jupiter's atmosphere changes with depth. Describe how the bottle has the same amount of air inside (pressure) as the room does, and the activity will model the crushing pressures of Jupiter's atmosphere.

Show the equipment to the children and explain that a Fizz-Keeper pumps air into a sealed bottle. Indicate which colors they should be looking for on the liquid crystal thermometer in order to read the temperature (the directions should be on the package). Ask the children to predict how the temperature inside the bottle will change as more air is added (the pressure increases). Have them record their predictions in their journals.

Safety Notes: This activity involves increasing air pressure within the bottle: ensure that children and teenagers are supervised by adults at all times.
Provide only one set or two sets of bottles, thermometers, and Fizz-Keeper Pumps at a time. Have participants stop pumping once the pressure is high (and it becomes difficult to pump). Do not allow participants to try to unscrew the Fizz-Keeper during the experiment. After the experiment, an adult should gently unscrew the bottles to allow the air inside to cool before using them again.

3. Ask the children to record the air temperature inside the bottle as the air inside it is compressed with sequentially more pumps of the Fizz-Keeper. Have them follow the directions in their journals.

4. Have the children discuss the general trends shown on their plots and note them in their journals.

Facilitator's Note: The children's plots may have some variability due to inconsistencies between the thermometers or other variables. Encourage them to identify the general trends of their plots, which will be a line sloping from the low pressure, low temperature (upper left) corner to the high- pressure, high temperature (lower right) corner.

5. Invite them to compare their plots with the same kind of plot for Earth's atmosphere, which is shown in their journals and on the Can You Take the (Low) Pressure? poster. Ask them to locate some familiar landmarks on the plot of Earth's atmosphere.

Mountain climbers must bring oxygen with them to breathe when they climb Mt. Everest!

Facilitator's Note: If hot air rises, why is it cooler at higher altitudes? Hot air does indeed rise, but it does not remain hot. It spreads out (expands) and cools as it rises. Hot air balloons must contain their heated air — and continually heat it — in order to rise and stay aloft.

6. Have the children consider how Jupiter's atmosphere changes with depth. Remind them that Jupiter is much more massive than Earth and has a lot more gas. Invite them to imagine that they are spacecraft flying deep into Jupiter's atmosphere. In its lower layers, their spacecraft instruments will detect low pressures and low temperatures at first. Invite the children to draw in their journals what they think they would find in Jupiter's lower atmosphere.

Add that Jupiter's immense gravity and the leftover heat from its formation provide an internal heat source that is more than two times greater than the heating it receives from the Sun's light.

Explain that the Juno spacecraft will study Jupiter's atmosphere to measure the temperatures at its different levels of pressure — like the children did in this activity and recorded in their journals!

Remind the children that the Juno spacecraft will not enter Jupiter's atmosphere, but will take Jupiter's temperature from orbit and "see" more deeply than any instrument has before. Scientists want to better understand what the different levels of Jupiter's atmosphere are made of, how it has such strong winds deep inside, and how the gases are whipped into the bands we see across Jupiter's exterior.