About Our Galaxy — The Milky Way

What is the Milky Way?
The Milky Way is a galaxy, a slowly rotating cluster of more than 200 billion stars! It is one of many galaxies in our universe.

What is a galaxy?
Galaxies are large collections of stars, gas and dust. They may have millions to billions of stars, all held into a cluster by gravitational attraction to each other. Most galaxies are flat, but there are different shapes — some are spirals, some are elliptical, and some are irregular.

What does the Milky Way look like?
Our Milky Way galaxy looks a little like a pinwheel. It is a spiral galaxy, about 100,000 light years across, with a bulge in the center (called the nuclear bulge) that contains the nucleus, a wide, flat disk with distinct spiral arms, and a surrounding halo of stars. There are several “spiral arms” in our Milky Way:  Sagittarius, Cygnus, Perseus, and Orion. Our solar system is located at the inner edge of the Orion arm. Our galaxy slowly spins and our solar system spins with it. Our solar system takes about 250 million years to make one complete orbit around the center of the galaxy.

The different parts of the galaxy contain different populations of stars. In the center of the galaxy, in the nuclear bulge, old metal-rich stars reside. Hot, young metal-rich stars — like our Sun — exist in the dusty arms of the disk. These tend to be bluish in color, giving the disk a blue tone. Old, metal-poor stars exist in the outer halo of our galaxy. These are the earliest formed stars in our galaxy. 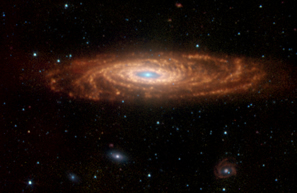 Infrared image of a spiral galaxy (NGC 7331) photographed by NASA's Spitzer Space Telescope. Scientists believe this galaxy looks like our own with swirling arms and a central bulge. This galaxy is about 50 million light-years away from Earth, in the constellation Pegasus. Image courtesy of NASA, the Jet Propulsion Laboratory, Caltech, and the Space Telescope Science Institute. 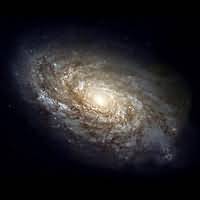 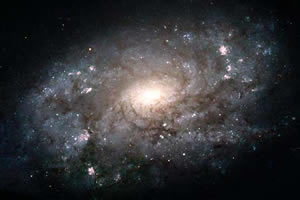 Hubble Space Telescope image of a spiral galaxy (NGC3949), about 50 million light years from Earth, located in the direction of the Big Dipper. Scientists think this galaxy is similar to our own in shape and structure, and they study it to get clues about the Milky Way. Like the Milky Way, there is a blue disk of young stars with bright pink areas where stars are believed to be born. The central bulge is made up of older, redder stars.
Image courtesy of NASA, European Space Agency, and the Hubble Heritage Team (Space Telescope Science Institute/AURA)

Infrared edge-on image of the Milky Way galaxy taken by the Cosmic Background Explorer (COBE) during its orbit around Earth. Image courtesy of NASA.
COBE's view of the Milky Way

Can you see the Milky Way? Yes! On a very dark night, away from bright lights, you can see a faint, hazy — or milky — band in the sky. This is the Milky Way. The hazy appearance is because there are so many stars that are very distant; your eye cannot distinguish the stars as separate points of light. By using binoculars or a telescope, you can see the individual stars.

Why do we see the Milky Way as a strip in the sky? The Milky Way is like a big, flat disk in space. We are looking into the wide part of the disk when we look at the band across the sky.

Where did our galaxy come from?
Some of the stars and clusters of stars in the Milky Way formed from the collapse of large rotating clouds of gas shortly after the Universe began, while others formed later. Some of the stars came from other galaxies that were pulled in (or “cannibalized”) by our growing galaxy.

The earliest stars formed from the hydrogen and helium. As they aged, they created new, heavier elements. When these stars eventually exploded in huge supernovas, they released the heavier elements which joined other gas and dust to form later stars. Stars still are forming, evolving, and dying, each contributing to the gas and dust within our Galaxy — each contributing to the formation of other stars.

Galaxies are organized into clusters. Our Milky Way galaxy is part of a Local Group, a cluster of about 35 galaxies, including the Andromeda galaxy.

Hubble Space Telescope Deep Field image shows at least 1500 galaxies in a frame of view that "covers a speck of the sky only about the width of a dime 75 feet away." Such numerous galaxies are observed in all directions in space. Image courtesy of Space Telescope Science Institute, the Hubble Deep Field Team, and NASA.