Why does our Moon shine?
The moon “shines” because it reflects the Sun's light. At times, our Moon reflects so much light that it makes viewing parts of the night sky challenging!

Why does our Moon's shape change?

Our Moon's shape doesn't really change — it only appears that way! The “amount” of Moon that we see as we look from Earth changes in a cycle that repeats about once a month (29.5 days). The relative positions of our Sun, Earth, and Moon, cause these changes.

As our Moon orbits around Earth, the side facing the Sun is always illuminated, just like Earth's daylight side is illuminated by the Sun.

What we see from Earth, however, is a different story. Starting with the dark new Moon, we see the light part of the Moon “grow” from a sliver to a half to a full Moon — and then the illuminated part decreases, becoming thinner until there is no visible Moon in the sky and we are at the new Moon part of the cycle again.

We have a “new Moon” when our Moon's orbit around Earth moves it between Earth and the Sun. From Earth, the Moon's surface looks dark because the illuminated side is facing away from Earth. As our Moon continues its orbit counterclockwise around Earth (viewed from above the north pole), more and more of the illuminated part of the Moon becomes visible to us, until it reaches the “full Moon” stage. A full Moon occurs when the Moon has moved in its orbit so that Earth is “between” the Moon and the Sun.

Between the new and full Moon, the amount of Moon we see grows — or waxes from its right side toward its left side. As it passes the full Moon stage, the amount of illumination decreases — or wanes — from right to left. Finally, the Moon returns to its position between the Earth and the Sun, and on Earth we observe the new Moon again.

In the southern hemisphere, illumination of the Moon increases from the left to the right side in the waxing phase and the dark part increases in coverage from left to right in the waning phase, which is opposite of the northern hemisphere. No matter where on Earth an observer is, however, the phases of the Moon occur at the same time. 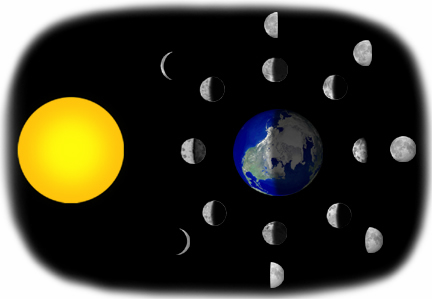 What causes a lunar eclipse?
Pictures of the Moon's phases often make it look like there should be a lunar eclipse during each full Moon and a solar eclipse during each new Moon. However, two things have to happen for a full lunar eclipse. First, the Moon has to be full, so there is only an opportunity for a lunar eclipse about once each month. Second, the Moon has to pass through Earth's shadow. The Moon's orbit around Earth is tilted a little, or “off kilter” by about 5 degrees to the Earth's orbit around the Sun. This means that most of the time the Moon is slightly above or below Earth's plane of orbit — and out of the shadow cast by Earth where it blocks the Sun's light. No eclipse occurs during these full Moons. But two to four times each year, a full Moon occurs when the Moon's orbit intersects Earth's plane of orbit, placing the Moon in Earth's shadow — and a lunar eclipse occurs!

How long does it take our Moon to go around Earth?
It takes 27 days, 7 hours, and 43 minutes for our Moon to complete one full orbit around Earth. This is called the sidereal month, and is measured by our Moon's position relative to distant “fixed” stars. However, it takes our Moon about 29.5 days to complete one cycle of phases (from new Moon to new Moon). This is called the synodic month. The difference between the sidereal and synodic months occurs because as our Moon moves around Earth, the Earth also moves around our Sun. Our Moon must travel a little farther in its path to make up for the added distance and complete the phase cycle.

What is the dark side of the Moon?
In spite of the phrase, there actually is no dark side of the Moon! Just like Earth, our Moon rotates on its own axis and experiences daylight and dark cycles. Our Moon's day and night cycles are a little longer than Earth's — the Moon spins on its axis once every 27.3 days. Our Moon's period of rotation matches the time of revolution around Earth. In other words, it takes our Moon the same length of time to turn once on its axis as it takes it to go once completely around the Earth! This means that Earth observers always see the same side of the Moon (called the “nearside”). The side we do not see from Earth, called the “farside,” has been mapped during lunar missions. 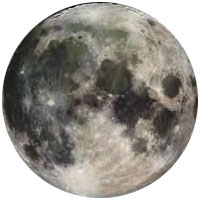 Nearside view of Earth's Moon as seen by the Galileo Spacecraft 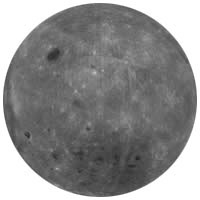 Do other planets have moons?
Yes! Several of the planets in our solar system have natural satellites that orbit them. Some are so recently discovered that they have not yet been named. Mars has Phobos and Deimos, two small moons that circle very close to the martian surface. Jupiter has more known satellites than any other planet — 61! The astronomer Galileo reported Jupiter's largest moons — Io, Europa, Ganymede, and Callisto — in 1610. Saturn has at least 31 satellites, Uranus has 27, and Neptune has 13 — and more are being discovered all the time! Pluto has one moon — Charon — the largest moon with respect to the size of the planet it revolves around. Only Mercury and Venus do not have any known satellites. Satellites are not restricted to planets; tiny Dactyl was discovered orbiting the asteroid Ida in 1994! 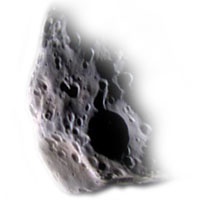 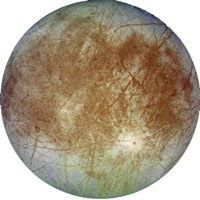