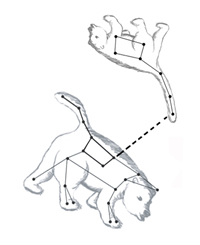 How Do I Find Polaris?
Polaris is located in the constellation Ursa Minor, which contains the group of stars that make up the “Little Dipper.” Polaris is the star in the end of the Little Dipper handle. Often, however, the Little Dipper is not very bright and can be challenging to find. Polaris is easiest to find by locating the seven stars of the Big Dipper in the constellation Ursa Major, or Big Bear. These stars form a small bowl with a long handle. Follow the stars of the Big Dipper from the handle to the side of the bowl, to the bowl bottom, and up the other side; the two stars forming the second side, Dubhe and Merak, point to Polaris. Take the distance between Dubhe and Merak; Polaris is the bright star that sits about five times that distance away.

Polaris actually is part of a binary (two) star system. Of the stars nearest to our Sun, about half are known to be in multiple systems (two or more stars). Between 5 and 10 percent of the stars we can observe are “visible binaries” — the star companions can be observed with a telescope. These systems reveal a great deal of information. Because of their interactions, astronomers can determine the gravitational pull exerted by the companions and calculate the mass of the individual stars. Polaris is helpful to astronomers in another way; it is a variable star. Polaris pulsates, a change we detect as a pattern of dimming and brightening. This pulsation helps astronomers calculate celestial distances. 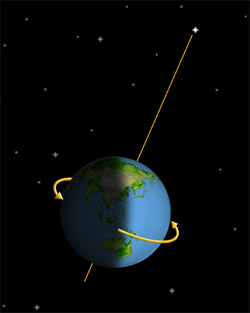 Why Doesn't Polaris Move?
Polaris is very distant from Earth, and located in a position very near Earth's north celestial pole.

Polaris actually lies just a short distance away from where Earth's axis points. Polaris is located about 1 degree off to the side of the north celestial pole, so Polaris does move a little, tracing a very small arc in the night sky, around which the other visible stars make wider circles. 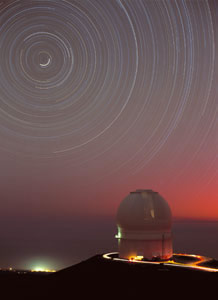 This picture of the night sky above Hawaii was taken by leaving the camera shutter open for a long time. The picture captures the apparent movement of the stars caused by Earth's rotation on its axis. Polaris is the star in the center of the star field; it shows essentially no movement. Earth's axis points almost directly to Polaris, so this star is observed to show the least movement. The other stars appear to trace arcs of movement because of Earth's spin on its axis.