About Our Solar System

How did our Solar System form?
Our Solar System began about 4.6 billion years ago when a cloud of dust and hydrogen and helium gases drifting in our galaxy began to condense and contract under its own gravity, forming a wide, flat, rotating disk. Most of the material collected in the center, condensing into a sphere of gas — our proto-Sun. Eventually pressures and temperatures in the sphere increased to the point that nuclear fusion began to occur and the Sun, the central star of our Solar System, began to shine. The remainder of the cloud formed a wide disk, swirling around the Sun, called the solar nebula. Dust and gas particles in the nebula occasionally collided and merged. Through this process, called “accretion,” these tiny particles formed larger and larger bodies, eventually becoming planetesimals up to a few kilometers across. Some of the planetesimals became so massive that their gravity pulled on other planetesimals, causing more and more collisions. Because of this, the largest planetesimals grew the fastest, sweeping up material in their paths, and eventually becoming the planets we know today.

Why are the inner and outer planets so different?
The rocky, terrestrial planets — Mercury, Venus, Earth, and Mars — all formed in the inner, hotter part of our Solar System. It was so hot that volatile materials — materials that evaporate easily at normal temperatures and pressures — could not condense. Much of the gas and ice in the solar system could not exist as solids at the high temperatures in the inner region. However, metals and silicates could withstand the high temperatures and these materials became concentrated in the inner solar system. It was from these heavier materials that the rocky inner planets were made.

In the outer, cooler portion of the Solar System more volatile materials such as water ice, other ices, and gases were able to accumulate onto the giant planets. Our outer gas giant planets — Jupiter, Saturn, Uranus, and Neptune formed from these materials. These planets have cores surrounded by thick accumulations of gases.

What about Pluto?
Tiny rocky icy Pluto lies beyond the gas giants. Pluto’s path of orbit is off the main plane of orbit that most of the planets occupy, and the shape of its orbit extremely elliptical. There are many other rocky icy bodies in similar orbits to Pluto, within the Kuiper belt.  Pluto is small — smaller than Earth’s Moon — much smaller than any planet. Pluto’s composition is a bit different also; it is a rocky icy body. In 2006, the International Astronomical Union determined that Pluto did not fit their new definition of a planet; to be a planet, an object needs to orbit the Sun, be nearly round due to its mass and gravity, and clear out its neighborhood of other objects.  They created a new class of objects —“dwarf planets” which orbit the Sun and are nearly round; Pluto and the largest asteroid Ceres fall into this new category, along with several other small bodies. So for now, our solar system has eight planets!

What is beyond Pluto?
The Kuiper belt is a band of rocky icy bodies that extend beyond Pluto — beyond Neptune, actually. These bodies have not had enough time to accrete into planets. Some scientists consider Pluto to be a large member of the Kuiper belt, rather than a planet. Occasionally the orbit of a Kuiper belt object will be disturbed by the interactions of the giant planets and may have a close encounter with Neptune that either flings the object out of the solar system or pushes it into an orbit within our solar system where we may observe in our night sky as a comet. Scientists believe that short period comets, those with orbits less than 200 years, like Halley’s Comet, originate in the Kuiper belt.

Even farther away than the Kuiper belt is the Oort cloud, a sphere of small icy bodies that envelops our solar system and may extend 30 trillion kilometers (about 20 trillion miles) away from our Sun! Long-period comets, those that take more than 200 years to orbit our Sun, like Comet Hale-Bopp or Comet Hyakutake, are believed to come from the Oort cloud.

Where do asteroids come from?
Asteroids are rocky remnants from our early solar system. Most orbit between the inner and outer planets in the Asteroid Belt. Scientists believe the materials have not accreted into a planet because Jupiter’s gravity exerts such a powerful pull! Asteroids occasionally reach Earth’s surface as meteorites.

Why do planets appear to wander?
The word planet means “wanderer” in Greek. Ancient cultures observed that certain objects appeared to wander across the night sky, while the stars remain fixed with respect to each other. These objects are the planets. The planets are moving in their orbits around the Sun. Almost all the planets trace the same path within the imaginary plane of the ecliptic, through the constellations of the zodiac. The planets move against the backdrop of stars over time spans of days or years. 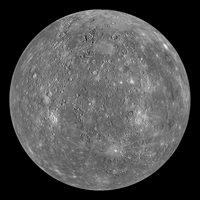 Mercury is about one-third the size of Earth. It is the closest to our Sun, orbiting it in just 88 days. Because it is so close to the Sun, its surface temperatures are extreme, ranging from 427ºC (800ºF) on the Sunny side to -183ºC (-297ºF) on the side facing away from the Sun. Mercury has no atmosphere  and no surface water; the high temperatures prevent these from forming. The surface of Mercury looks like our Moon. It is covered by craters, indicating its long history of bombardment by asteroids and other impactors.

Venus is almost the size of Earth. Its rotation is very slow — Venus turns once on its axis every 243 Earth days — and it spins backwards relative to the other planets. The time it takes to rotate is very close to the time it takes to orbit the Sun. Surface temperatures on Venus range from 377ºC to 487ºC (710º to 908ºF) — even hotter than Mercury! The reason that Venus is hotter, even though it is farther from the Sun, is that it has a thick atmosphere composed of carbon dioxide and traces of water and sulfuric acid. This atmosphere — about ninety times the pressure of Earth’s atmosphere — creates an intense greenhouse effect; heat is trapped in the atmosphere. 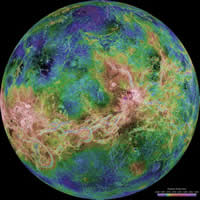 Mosaic of Magellan images of Venus, color coded to represent elevation.
Image courtesy of the USGS and JPL, NASA. 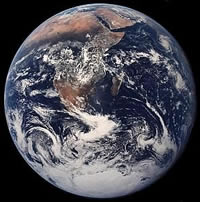 Earth is a dynamic planet. It also is the only planet we know that has life. It spins on its axis once a day and orbits the Sun once a year (other planet’s years and days often are presented relative to Earth’s). The rotation axis is tilted, giving Earth its seasons. Surface temperatures range from –73º to 48ºC (-100 to 120ºF) and liquid water is abundant.  Earth’s atmosphere traps energy from sunlight, creating a greenhouse effect that warms the surface. It also moderates the climate and protects the surface from damaging components of solar radiation.

Mars is about half the size of Earth. Its period of rotation is very close to Earth’s, but it takes about two Earth years to orbit the Sun. Mars is tilted on its axis, so it experiences seasons. Surface temperatures are cold -83º to -33ºC (-117º to -27ºF) and the planet is very dry. The atmosphere is thin and composed mostly of carbon dioxide. There is no liquid water present at the surface. There may be frozen water in the subsurface, and Mars has ice caps in its polar regions. The ice is a combination of carbon dioxide and water ice. There is evidence that Mars had flowing water and oceans at its surface during its early history, perhaps until about three and a half billion years ago. Mars has the tallest volcano in our Solar System — it is about 22 kilometers tall (almost 14 miles high; compare this to Hawaii’s Mouna Loa at 9 kilometers/5.5 miles tall measured from the sea floor). 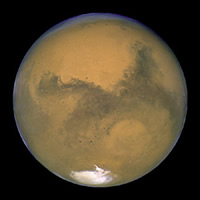 Hubble Space Telescope image of Mars as it made its closest approach to Earth in August 2003.
Image courtesy of NASA. 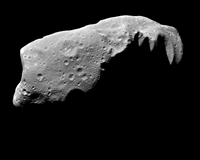 Between the Inner Planets and the Outer Planets the Asteroid Belt resides. Asteroids are rocky remnants from our early Solar System. They range in size from 1000 kilometers across (620 miles) to the size of sand grains. Asteroids occasionally reach Earth’s surface as meteorites, providing scientists with information about when our Solar System formed and the processes that occurred.

Jupiter is the largest planet in our Solar System; about 1000 Earths could fit inside a hollow Jupiter. It contains more mass than all of the other planets combined. Jupiter spins on its axis once every 10 hours and orbits the Sun once every 12 years. It is about 90% hydrogen and 10% helium with some methane, water, and ammonia.  Temperatures reach –200ºC (-325ºF) at the top of the atmosphere. The atmosphere is tumultuous, divided into distinct bands. Wind speeds are high, up to 400 kilometers per hour (250 miles per hour) and lightening is frequent. The Giant Red Spot is a massive storm system — larger than the diameter of Earth – that has been raging at least 400 years.  Jupiter has at least 67 moons. Ganymede, the largest of Jupiter’s moons, is larger than the planet Mercury. 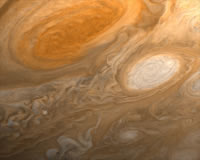 Voyager 1 image of the Giant Red Spot of Jupiter.
Image courtesy of NASA.

Cassini image of Jupiter.
Image courtesy of NASA/JPL/University of Arizona 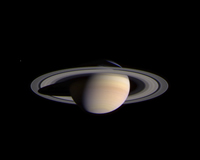 Saturn is the second largest planet. Its day is 11 hours long and its orbit around the Sun takes about 30 years. Its composition and atmosphere are similar to Jupiter’s. Winds reach 1770 kilometers per hour (1,100 miles an hour). Saturn is best know for its beautiful rings. The ring system stretches to a diameter of 250,000 kilometers (155,000 miles) but is only 1 kilometer thick (a little over half a mile). Saturn has at least 62 moons.

Uranus was the first planet discovered by telescope. Like the other gas giants, its atmosphere is mostly hydrogen and helium. It has a little methane in its atmosphere, which absorbs red light, giving Uranus its blue-green color. The interior of Uranus contains more rock and ice than Jupiter and Saturn. It rotates on its axis once every 17 hours and orbits the Sun once every 84 years. Unlike the other planets, Uranus’ axis is tilted so that the planet rotates on its side. Given Uranus’ long period of orbit, this translates into a 20-year winter or summer! Uranus has 27 known satellites. 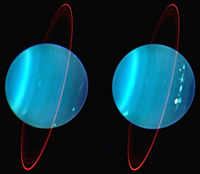 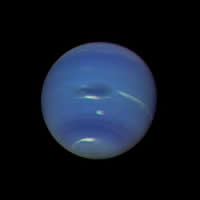 Color image by the Voyager 2 spacecraft of Neptune.
Image courtesy of JPL, NASA.

Neptune is the farthest gas giant planet. Neptune spins on its axis once every 16 hours, and an orbit around the Sun takes 165 years. Like Uranus, it has methane in its atmosphere, which gives it its blue hue. Neptune has the fastest winds in the Solar System (2000 kilometers per hour or 1250 miles per hour), and some massive storm systems that move within its atmosphere. It has 14 known moons and 4 rings.

Pluto is a dwarf planet, orbiting the Sun much farther than the planets. However, Pluto has a highly elliptical orbit and sometimes is inside of Neptune’s orbit. Pluto rotates on its axis once every 6 days, and its journey around the Sun takes 240 Earth years. It is a small icy, rocky body. Pluto has one well known moon Charon, which is half Pluto’s size, and four smaller moons. 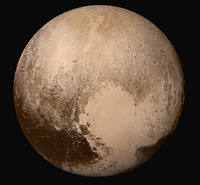