About the Story Tellers 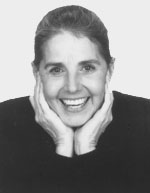 Lynn Moroney (Chickasaw)
Like many with roots on the plains of Oklahoma, Lynn Moroney has both Native and Anglo American ancestry. She boasts of her citizenship in the Chickasaw Nation as well as her “Okie” stock. Her ethnic and cultural background, along with a personal landscape that reflects the windswept expanse of the prairie, have blended to give her a world view that invites the celebration and affirmation of the traditions of all peoples. Lynn is a full-time storyteller and published writer. She presents workshops, performances, and residencies for schools, libraries, museums, and planetariums. She has performed and conducted storytelling, science, and writing workshops across the U.S. and in Mexico. A former planetarium director, Lynn is best known for her interpretation of world sky lore, and has performed these stories in settings that range from the Smithsonian Institution in Washington, DC, to the California Academy of Science in San Francisco. 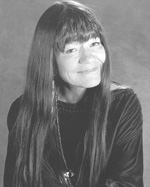 Dovie Thomason Sickles (Kiowa Apache/Lakota)
Dovie Thomason-Sickles is an award-winning storyteller, recording artist, and author, recognized internationally for her ability to take her listeners to the “timeless place” where she was first captivated by the old Indian stories from her Plains Apache and Lakota relatives. Since then Dovie has been on a lifelong path of sharing her stories to give people a clearer understanding of the often misunderstood cultures of Native Americans. She has been featured in NASA and Indian Education programs, Shakespeare's Globe Theatre, the Smithsonian, National Geographic, and major storytelling festivals. She was winner of the Parents' Choice Gold Award, Storytelling World Honors Award, and twice honored by the ALA for her recordings of traditional Native American stories. Dovie was also recently honored by the Wordcraft Circle of Native Writers as Traditional Storyteller of 2002. 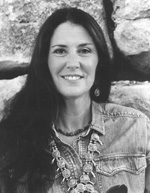 Gayle Ross (Cherokee)
Gayle Ross is a descendent of John Ross, the Principal Chief of the Cherokee Nation during the legendary “Trail of Tears.” Her grandmother told stories, and it is from this rich Native American heritage that Gayle's storytelling springs. Whether she is provoking laughter with a “true” Texas tale or moving her listeners to tears with a haunting Native American legend, Gayle is a masterful storyteller whose performances mesmerize audiences of all ages. Featured in touring shows of the National Council of Traditional Arts, she was the only Native American chosen by the White House to appear in the Millennium on the Mall celebration. Gayle has authored five critically acclaimed children's books, and is regularly invited to speak at both European and American literary events. She has been featured on the Discovery Channel and is a frequent visitor to National Public Radio programs. 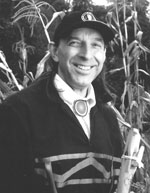 Joseph Bruchac (Abenaki)
Joseph Bruchac lives in the foothills of the Adirondack Mountains where he was raised. Much of his writing draws on that land and his Abenaki Indian ancestry. Joseph holds a master's degree in literature and creative writing from Syracuse and a Ph.D. in comparative literature from the Union Institute of Ohio. His poems, articles, and stories have appeared in over 500 publications, and he has authored more than 80 books for adults and children. As a highly honored professional storyteller of Native American tales, Joseph has performed widely in Europe and throughout the U.S. He has been a storyteller for Native American organizations and schools throughout the continent. 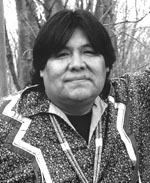 Michael Lacapa (1955–2005) (Apache/Hopi/Tewa)
Michael Lacapa, well-known author and illustrator of children's books, was also nationally recognized for his Native American storytelling. Michael's ethnic roots were Hopi, Tewa, and Apache. Growing up on the Fort Apache Indian Reservation in Whiteriver, Arizona, Michael learned from his elders the importance of “sharing yourself with others.” Michael shared himself through his artwork, books, and stories told of a long time ago. In addition, he worked as a teacher, publisher, and educational consultant, and was featured several times as the keynote speaker at storyteller conventions and festivals. Michael was a featured artist in exhibits across the Southwest, and was the recipient of numerous awards in both art and literature. 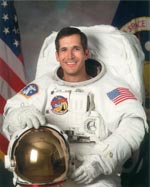 Captain John Herrington  (Chickasaw)
U.S. Navy Captain John Herrington traces his Chickasaw heritage through his maternal great-grandmother. John is not a storyteller by profession, but after tackling space travel, he bravely submitted himself to several hours in a tiny recording booth. His voice reflects his childhood upbringing in Oklahoma, Texas, Wyoming, and Colorado. John has a degree in applied mathematics from the University of Colorado at Colorado Springs and a master's degree in aeronautical engineering from the U.S. Naval Postgraduate School, in addition to his standing as a Naval aviator. In November 2002, John became the first Native American astronaut in space. During his time aboard the International Space Station (ISS), he carried the Chickasaw Nation's flag to honor his heritage.