Our Sun is our nearest star. Its light and heat make life on Earth possible!

When did our Sun form?
Scientists calculate our Sun and solar system formed at the same time - a whopping 4.56 billion years ago. This is based on the ages of the oldest objects that we have sampled from our solar system - meteorites.

How did our Sun form?
Our Sun and the solar system formed from a huge, slowly rotating molecular cloud made of hydrogen and helium molecules and dust. Under its own gravity, the cloud began to compress. As it compressed, it spun faster and faster, like an ice skater who spins faster as he pulls his arms in closer to his body. The spinning flattened the material into a giant disk. Most of the mass was concentrated at the center of the disk, forming a gas sphere. The sphere continued to attract material from the disk. As new material was added, the sphere compressed, increasing the temperatures and pressures until they were sufficient to fuse atoms in the very center of the sphere - and at that point a star - our Sun, was born. The planets and other components of the solar system formed from the remainder of the disk. By exploring our universe with tools such as the Hubble Space Telescope, scientists have discovered stars in various stages of formation. This helps them understand how our Sun may have formed.

How much longer will our Sun shine?
Our Sun will shine as it is for about another 3 to 5 billion years! It will then evolve into a Red Giant over a few more billion years. Scientists arrive at this estimate by calculating how fast the hydrogen in the Sun's core is being converted to helium. Approximately 37% of our Sun's hydrogen has been used since it formed four and a half billion years ago.

How far away is our Sun?
Our Sun's average distance from Earth is 150 million kilometers (93 million miles).

The Sun's energy is generated in its core. Gravitational pressures compress and heat the material in the core to over 15 million degrees Celsius or about 27 million degrees Fahrenheit! That's HOT!

Energy passes from the core into the cooler radiative zone (merely 5 million degrees Celsius, or about 9 million degrees Fahrenheit). Here the energy (radiation) moves randomly from atom to atom, with some of the energy moving toward the Sun's surface. 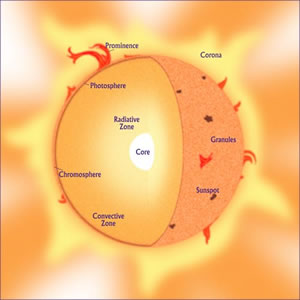 The photosphere ("sphere of light") is the "surface" of our Sun; because our Sun is made of gas, it does not have a solid surface. The photosphere has temperatures that reach about 5525 degrees Celsius (9975 degrees Fahrenheit ) and is the layer that releases most of the light that reaches Earth.

The surface of our Sun has continuously changing dark regions - sunspots. The spots are dark because they are cooler than the surrounding gas (about 3230 degrees Celsius or 5850 degrees Fahrenheit). Sunspots can persist for an hour to several months. The number of sunspots increases and decreases in an 11-year cycle - the solar cycle.

The photosphere and sunspots can be viewed safely with special solar telescopes - but not directly with the human eye!

The chromosphere ("sphere of color") is a 2000-kilometer-thick layer of gas that reaches temperatures between 6000 and 50,000 degrees Celsius (that's about 10,825 to 90,000 Fahrenheit). Most of the energy from the chromosphere is released as red light, which means that the chromosphere can be viewed with special telescopes that filter out the other wavelengths. The chromosphere is dynamic; convection cells swirl the surface, and material shoots off the surface as flame-like features.

The corona is a thin outer layer of our Sun that is seen during a solar eclipse. The corona emits energy at many different wavelengths. Loops and arches of matter are often seen extending out from the corona along lines of the Sun's magnetic field. This material flows away from our Sun as the solar wind. Some of the particles reach Earth's atmosphere and interact with atmospheric particles to create the aurora.

What is our Sun made of?
While approximately 60 different elements make up our Sun, hydrogen accounts for about 92% of the atoms (almost three-fourths of the mass) and helium makes up most of the rest (7.8% of the atoms). This is similar to the composition of our universe; hydrogen is the most abundant element, with some helium, and trace amounts of all other heavier elements (like carbon, nitrogen, oxygen, and silicon). We do not have any direct samples from our Sun yet, but scientists can identify the elements by observing the solar spectrum.

Our Sun, like other stars, emits light, and in some cases more light in one color than another (and some colors are not emitted at all because they are absorbed). Gases of different elements have distinct patterns of emission or absorption that can be determined in the laboratory. Once scientists know which pattern matches which element, they can determine the composition of our Sun - or other stars in the universe - by examining the pattern of the spectrum. The Genesis Mission recently returned samples of the solar wind to Earth; scientists currently are studying these samples to gain a deeper understanding of the composition of our Sun.

Where does the Sun's energy come from?
Stars like our Sun generate their power by turning mass into energy through the process of nuclear fusion. Essentially, hydrogen is converted into helium in the Sun's core, and a little bit of energy is produced every time the reaction occurs.

Gravitational pressure compresses and heats the core material to over 15 million degrees Celsius (about 27 million degrees Fahrenheit). In these extreme conditions atoms cannot exist - hydrogen atoms split apart into protons and electrons. Four hydrogen protons become fused into a single helium nucleus. This helium atom has a smaller mass than the four hydrogen atoms and the mass difference is released as energy; fusion turns mass into energy. While one fusion reaction does not produce much energy, 600 million tons of hydrogen are converted to energy in our Sun every second!

While it feels like we get a lot of energy from our Sun, the amount we actually receive is very small. Because of Earth's distance from our Sun, and because the Sun sends energy in all directions, we only get about one two-billionth of the amount emitted by our Sun. About half of the Sun's energy is in the visible part of the spectrum and much of the rest is infrared radiation. We use special instruments to detect other types of energy like gamma rays and ultraviolet rays. 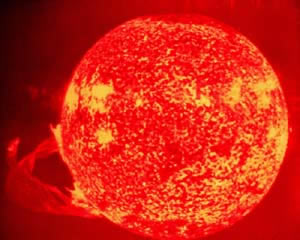 Solar Flare from the surface of the Sun.
Image courtesy of NOAA.

How does our Sun influence Earth?
The amount of energy reaching Earth is fairly consistent over time, and is called the "solar constant." Our Sun, however, is anything but constant! Sunspots move across the photosphere, growing and diminishing in number in an 11-year cycle. Solar flares, possibly caused by sudden changes in the magnetic field, accompany the sunspots and spew gases and particles into space. Clouds of gases occasionally rise and erupt from the chromosphere as coronal mass ejections (what scientists call "CMEs"), also corresponding to the 11-year periods of solar maxima. During a mass ejection event, plumes of material pass into space at speeds in excess of 1000 kilometers per second. All this material contributes to the solar wind, a stream of radiation and particles that flows into space from the outer surface of our Sun. Earth's magnetic field deflects and protects us from the solar wind. During periods of extreme solar activity, the radiation and particles interact with Earth's magnetic field to produce the polar auroras. These periods of extreme activity, however, can disrupt communications by damaging the delicate electronics in satellites and interfering with radio waves. Even power grids are not immune; the charged particles alter the magnetic fields around power and phone lines and can induce current surges. While these "storms from space" are disruptive, they do not directly threaten human health on Earth. This is not true in space; astronauts are not protected by Earth's magnetic field and they — and the spacecraft they operate — could be affected by a solar storm.

Illustration of the SOHO Space Craft.
Image courtesy of Solar & Heliospheric Observatory (SOHO).
SOHO is a project of international cooperation between ESA and NASA.

How are we studying our Sun?
Galileo initiated our investigations of solar activity with his observations of sunspot movement using the newly invented telescope in the early 1600s (1610-1613). Our investigations continue today but take us beyond the visual realm. Space scientists are using all parts of the electromagnetic spectrum, including the ultraviolet, radio, and gamma ranges, to learn more about our Sun. Satellites such as the Hubble Space Telescope and the Solar and Heliospheric Observatory (SOHO) aid their research. Some missions, such as the Genesis sample mission, involve the collection of particles carried by the solar wind. Space scientists will use this information to understand the composition of our Sun, its origin, and the formation of stars and planets. Other missions, like the Ulysses solar polar orbiter, orbit our Sun to monitor the solar wind intensity and magnetic field to understand solar processes. Researchers are also monitoring solar activity through the Geotail mission to understand solar impacts on space exploration, communications, and technology. Moving closer to home, scientists are investigating the interaction of our Sun and Earth systems to learn more about how our Sun influences Earth's weather and climate.