News Archive
“We need to step back, think bigger, and think more in a cross-disciplinary way.”
Louise Prockter, LPI Director 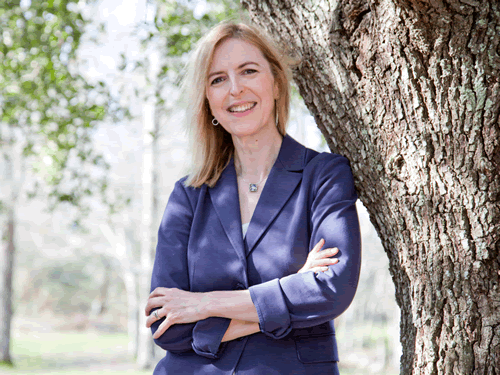 The Lunar and Planetary Institute’s (LPI’s) Director, Louise Prockter, sat down with SpaceNews contributor Leonard David at the 48th Lunar and Planetary Science Conference (LPSC) in The Woodlands, Texas.  She discussed her plans for LPI and shared her vision for planetary science and exploration.

Next year, LPI marks the 50th anniversary of its founding. The following year, it will mark the 50th anniversary of LPSC — a seminal gathering of space scientists LPI has held every year since 1970. “I’m planning a lot of things to show what we’ve done over that time,” Prockter says. “I see my job as showing the value of LPI, how we can facilitate science and how we can help bring the community together in ways that wouldn’t be possible otherwise.” One example is the new initiative called The First Billion Years of the Solar System which kicks off in August with Accretion: Building New Worlds, the first of four conferences across a three-year span.

Not only has the community of planetary scientists grown since LPI opened its doors nearly 50 years ago, so too has the variety of science the community performs. Prockter recalled what it was like attending LPI’s annual conference as a grad student in the late 1990s. “It felt like you could get your arms around everything,” she said. “Now you can’t.”

When asked her view on human exploration and whether we go to Mars or the Moon first, Prockter doesn’t think anyone would be able to argue that one of these planetary objects is more significant than the other. “It all depends on what your exploration objective is, or what scientific questions you are trying to ask” says Prockter. She sees the Moon as a stepping stone on the way to Mars and a proving ground for many types of technology and astronaut training.

Prockter’s approach regarding the limited budget we have on planetary science missions is to look for answers to the big questions for the community as a whole. “We need to step back, think bigger, and think more in a cross-disciplinary way,” she says. There are many challenges ahead for planetary scientists, she said, but everyone is poised for a new cadence of exploration and discovery.