LPI Scientists on a Mission to Mars

NASA is expected to launch the Mars 2020 Perseverance mission from Cape Canaveral, Florida between July 30 and August 15, and land on Mars on February 18, 2021. Carrying innovative scientific instruments, the Perseverance rover is designed to better understand the geology of Mars and seek signs of ancient life.

Dr. Allan Treiman is the Interim Director of the Lunar and Planetary Institute and co-investigator on the Planetary Instrument for X-Ray Lithochemistry (PIXL) instrument, one of the seven scientific instruments on the Mars 2020 Perseverance rover. PIXL is the chemical analysis and imaging instrument on Perseverance's arm and plays a particularly important role in the search for potential signs of ancient life. 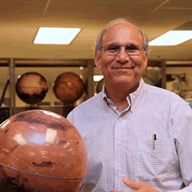 Treiman's expertise is in the study of rocks and their origins, known as petrology. He has spent much of his career studying the chemistry (and mineralogy) of Mars meteorites. The types of data PIXL will collect from rocks in Jezero Crater on Mars are the same that Treiman has been collecting from Mars meteorites found on Earth his entire career! Treiman will apply his work on Mars meteorites (and other rocks) directly to the PIXL data to help understand how the Jezero Crater rocks formed, and what they mean for the larger questions of Mars' history and potential for life.

“Jezero Crater formed early in Mars' history, and the river delta Perseverance will visit formed when liquid water flowed across its surface and filled Jezero Crater,” says Dr. Treiman. “Studying the riverbeds and sediments in Jezero will tell us a lot about how Mars formed and developed, and what its climate was like then.”

The most exciting discovery for the Mars 2020 mission teams would be evidence of ancient martian life. However, no one expects to find fossil bones or seashells. If anything, evidence of ancient Martian life would likely be complex organic molecules or rock structures called stromatolites which are formed by algae or bacteria. Barring evidence of life, the most exciting thing for Treiman would be finding pieces of Mars' ancient crust — which will teach us a lot about Mars' early climate and history, and why the Red Planet is so different from Earth now.

Dr. Germán Martínez is a USRA staff scientist at the Lunar and Planetary Institute and is a co-investigator on the Mars Environmental Dynamics Analyzer (MEDA), one of the seven scientific instruments on the Perseverance rover. MEDA is suite of six environmental sensors (basically a meteorological station) including the Thermal Infrared Sensor (TIRS). Martínez defined the scientific requirements of TIRS and will oversee the analysis of TIRS data as it comes down from Mars, along with MEDA's Principal Investigator J. A. Rodríguez-Manfredi, and TIRS' leading engineer E. Sebastián.

TIRS will measure amounts of infrared (heat) radiation flowing up from and down to Mars' surface, along with solar radiation reflected from the surface, surface temperature, and the air temperature at an altitude of 40 meters (approximately 130 feet). TIRS will be the first sensor on Mars to measure surface radiation in both upward- and downward-looking directions, which are important for understanding Mars' local weather and long-term climate. TIRS measurements will complement and extend similar measurements taken by NASA's Curiosity rover, the Mars InSight Lander, and the Mars Exploration Rovers, Spirit and Opportunity.

Martínez's research focus is to help enable the safe human exploration of Mars, which is one of Mars 2020's mission objectives: “to enable future Mars exploration especially by humans by making progress in filling strategic knowledge gaps and by demonstrating new technologies.” Some of the TIRS data will be critical in filling a 'strategic knowledge gap' for Mars, namely to “to validate and improve the predictive capabilities of models of the near-surface environment on Mars.”

“I expect MEDA, in general, and TIRS, in particular, to improve the predictive capabilities of weather models on Mars,” says Dr. Martínez. “Before sending our astronauts to the Red Planet, we need to understand and predict the near-surface thermal, radiative, and dynamic environment of Mars, as well as the distribution of water and dust. MEDA and the TIRS will be critical to achieving this goal.”

Rather than any one great discovery, Martínez is more interested in building-up knowledge in preparation for the human exploration of Mars. He hopes all the sensors onboard the Perseverance rover remain functional throughout the life of the mission so the science community can take full advantage of the rover's unprecedented and sophisticated payload.