Germán Martínez and his wife in his hometown of Murcia, Spain.

Recently, LPI welcomed a new staff scientist, Dr. Germán Martínez. Dr. Martínez comes to LPI from the University of Michigan, and is a member of NASA's Mars Science Laboratory (MSL) mission and a Co-Investigator on NASA's Mars 2020 mission. Read LPI’s interview with Dr. Martínez below to learn more. Germán on the day of his thesis defense.

GM:  All of my education took place in Spain. I have a B.S. in Physics, an M.S. in Atmospheric Sciences, an M.Ed., and a PhD in Space Sciences, all from Universidad Complutense de Madrid. I know I was lucky, education in Spain is great.

LPI:  How did you become interested in space science?

GM:  Well, I vividly remember that scene from Total Recall where Arnold Schwarzenegger was exposed to Martian air and his eyes popped out. I was 8 or 9 years old, freaking out in the movie theater, wondering what was going on. That was definitely my first contact with space science.

LPI:  When did you know that you wanted to pursue this as a career? Did you have a mentor or another person in your life who was influential to your decision or career? 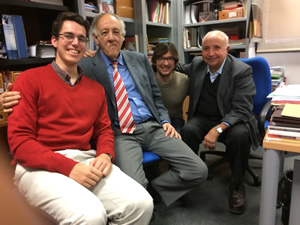 GM:  I always knew I would become a scientist. Math and physics were my favorite subjects since primary school, whereas most of friends hated them very badly. To me, those classes were extremely relaxing and always gave me peace of mind, but if you were born in my hometown of Murcia, Spain, becoming a space scientist was not tangible. However, my life changed in my senior year of college when I took an atmospheric radiation course and scored highest in the class. After that, Professor Francisco Valero invited me to his office for a talk. I was scared and clueless, but that talk and that exam redirected my life. He offered me a spot in the PhD program to study with him and Prof. Luis Vázquez, the PI of the Rover Environmental Station instrument onboard NASA’s Mars Science Laboratory (MSL) mission. That was too cool to not accept it, so I did. And my luck did not stop there. During my PhD, I met Prof. Nilton Renno from the University of Michigan, Co-Investigator on NASA’s Phoenix and MSL missions to Mars. When I finished my PhD, Nilton brought me to the US. That was in 2011, when the global economic crisis was hitting Spain hard. I’m one of those in my generation that had to leave. Eight years later, here I am, now with a daughter born in the States.

LPI:  What is the focus of your research? 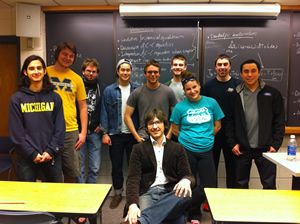 Germán (seated) with undergrad students at University of Michigan.

GM:  [My research focuses on] understanding the environmental conditions on Mars, with a focus on its water and radiative environment and the implications for its habitability and future human missions. To that end, I do a little bit of everything:  data analysis from orbiters, rovers, and landers, numerical modeling, lab work, and instrument development. I plan to extend this knowledge to the icy worlds (e.g., Europa or Enceladus) to understand brine (aqueous saline solutions) formation on them.

LPI:  What is the most unexpected or exciting result that you’ve encountered in your research?

GM:  The fact that the Martian polar regions, despite their frigid temperatures, have a greater potential for brine formation than mid-, low- and equatorial- latitude regions https://link.springer.com/article/10.1007/s11214-017-0360-x). LPI:  What do you most look forward to as it relates to planetary science over the next 10+ years?

GM:  I’m very excited about the launch of NASA’s Mars 2020 mission, which I am a Co-Investigator on. One of the seven instruments onboard this mission is the Mars Environmental Dynamics Analyzer (MEDA), an environmental suite designed to characterize the near-surface climate of Mars and prepare for human exploration. The Thermal InfraRed Sensor (TIRS) is one of the six sensors comprising MEDA, and it will measure the net radiation (solar and atmospheric) at the surface of Mars for the first time. I have been working on defining the scientific requirements of TIRS for years with TIRS’ leading engineer, Dr. Sebastián from Centro de Astrobiología, Spain. Now I can’t wait to analyze its measurements. 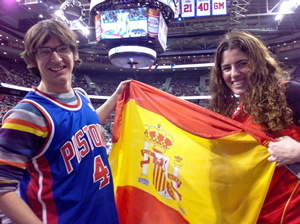 Germán and his wife at their first NBA game.

I think that the in situ measurements by NASA’s MSL and Mars 2020 rovers, and by ESA’s 2020 ExoMars Rover will provide a unique dataset to pave the way for the future human exploration of the red planet. I definitely want to contribute to this enterprise.

LPI:  What would be your dream research trip?

GM:  As much as I love the solar system, to me, nothing beats a trip to old, coastal towns in the Mediterranean or Caribbean Sea. That said, if I absolutely had to visit somewhere in the solar system, I’d stay as close to the Sun as possible. Eight years in Michigan are enough to get a taste of what frigid planets like Pluto feel like!

LPI:  Do you have a favorite hobby or interest outside of work?

GM:  I’m a big sports fan. Since I was a kid I’ve loved soccer, tennis, and the NBA. I love watching games and then studying their statistics. I’m a tough fantasy league competitor. In soccer I root equally hard for Real Madrid and Barcelona, which is extremely unusual for a Spaniard. In tennis, Rafa Nadal is my player. In the NBA, Larry Bird was my guy and the Celtics my team. Those NBA finals against the Lakers were great childhood memories.