LPI | In The News 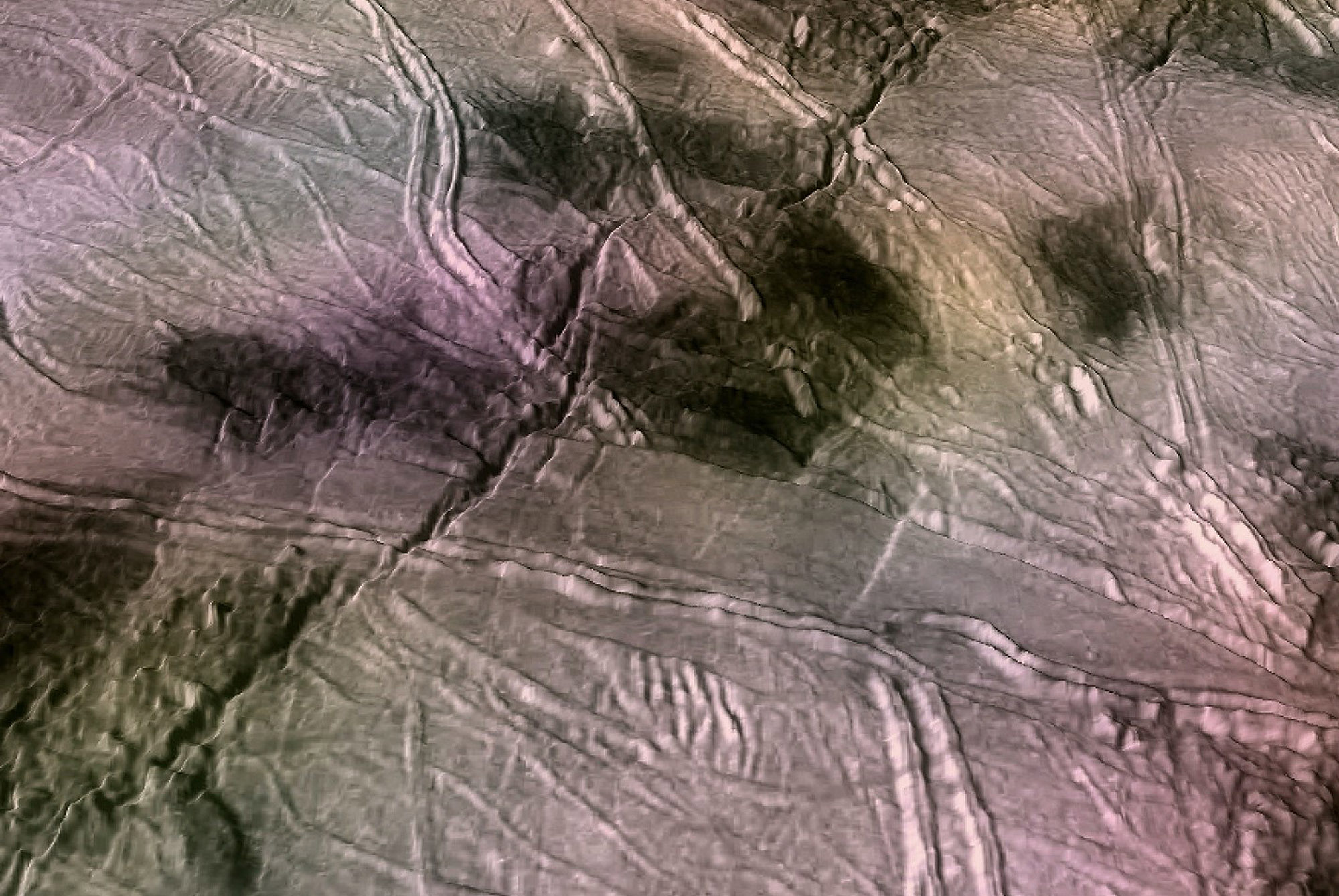 Perspective views of fractures on the surface of Europa formed during true polar wander. The large cracks crossing the scene from left to upper right are ~3 kilometers (1.9 miles) wide and 200 meters deep. The double ridges crossing the scene are similar in width. Credit: P. Schenk/USRA-LPI.

Europa’s outer icy shell has completely reoriented itself in one of the last geologic events recorded on its young surface. Europa’s poles are not where they used to be. Cracks in the surface of Jupiter’s icy moon indicate its shell of ice rotated by 70 degrees sometime in the last several million years. In addition to supporting prior evidence for the existence of a subsurface ocean, it also means that the geologic history of Europa’s surface must be reexamined.

New research, led by Universities Space Research Association’s Senior Staff Scientist Dr. Paul Schenk at the Lunar and Planetary Institute (LPI), confirms that Europa’s large global scale circular patterns formed during a large reorientation of its icy outer shell with respect to its spin axis, a process known as true polar wander. This can only happen if the icy shell is uncoupled, or floating free, separated from the rocky core of the planet by a liquid water ocean. The findings were published July 29, 2020 in Geophysical Research Letters.

“Our key finding is that the fractures associated with true polar wander on Europa cross-cut all terrains. This means that the true polar wander event is very young and that the ice shell and all features formed on it have moved more than 70° of latitude from where they first formed,” reports Dr. Schenk. “If true, then the entire recorded history of tectonics on Europa should be reevaluated.”

Using a combination of global maps from Galileo and Voyager data with improved precision, and detailed topographic data derived from them, a team of scientists from the LPI in Houston, the University of California at Santa Cruz, and the University of Arizona in Tucson have correlated large fractures on the surface of Europa with previously identified concentric circular depressions on the surface.

NASA's Galileo spacecraft orbited Jupiter from 1995 to 2003 and returned hundreds of images of Europa’s surface. Reconstruction of the global map of Europa at 200-meter resolution in color in preparation for a return to Europa revealed that these mysterious fracture systems were part of the circular true polar wander patterns identified previously. Topographic mapping in the highest resolution images of the fractures at 40 meters per pixel show that the fractures are more than 200 meters deep. The fractures cut through all known terrains and thus show that the deformation related to the global reorientation (or true polar wander) event was one of the last events to occur on Europa. These features also imply that the floating ice shell on Europa may have thickened over time.

"Another important aspect of this work is that it makes predictions for additional features and ice shell properties which can be tested when the planned Europa Clipper spacecraft starts observing Europa," says coinvestigator Francis Nimmo at the University of California at Santa Cruz.

These too can be searched for and tested when Europa Clipper arrives later this decade. Europa Clipper will complete the map of Europa, including high-resolution images and soundings of these features. These maps will help determine the absolute age of these fractures and depressions and other consequences of the polar wander event that created them.