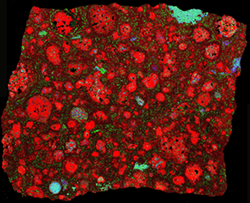 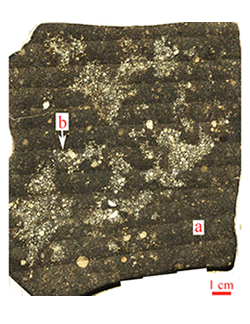 Planetary scientists found evidence that Earth and other terrestrial planets may have formed from clusters of space dust the size of golf balls.

Justin Simon, a scientist in the Astromaterials Research and Exploration Science (ARES) Division at NASA Johnson Space Center (JSC) made the discovery while co-leading a study of two ancient meteorites, Allende and Northwest Africa 5717. The meteorites were found in fragments across Mexico and North Africa and are believed to have formed well before the terrestrial planets we see today.

Over the course of six years, the research team examined thousands of particles within electron microscope images of the meteorites to learn more about their structure and composition. The team had to review and detail each scan individually to ensure total accuracy. To accomplish this monumental task, Simon collaborated with the Lunar and Planetary Institute to bring summer interns to JSC to assist with the analysis.

“This work wouldn’t have been possible without the help of all those enthusiastic students,” Simon said. “This groundbreaking research really highlights the value of a NASA internship.”