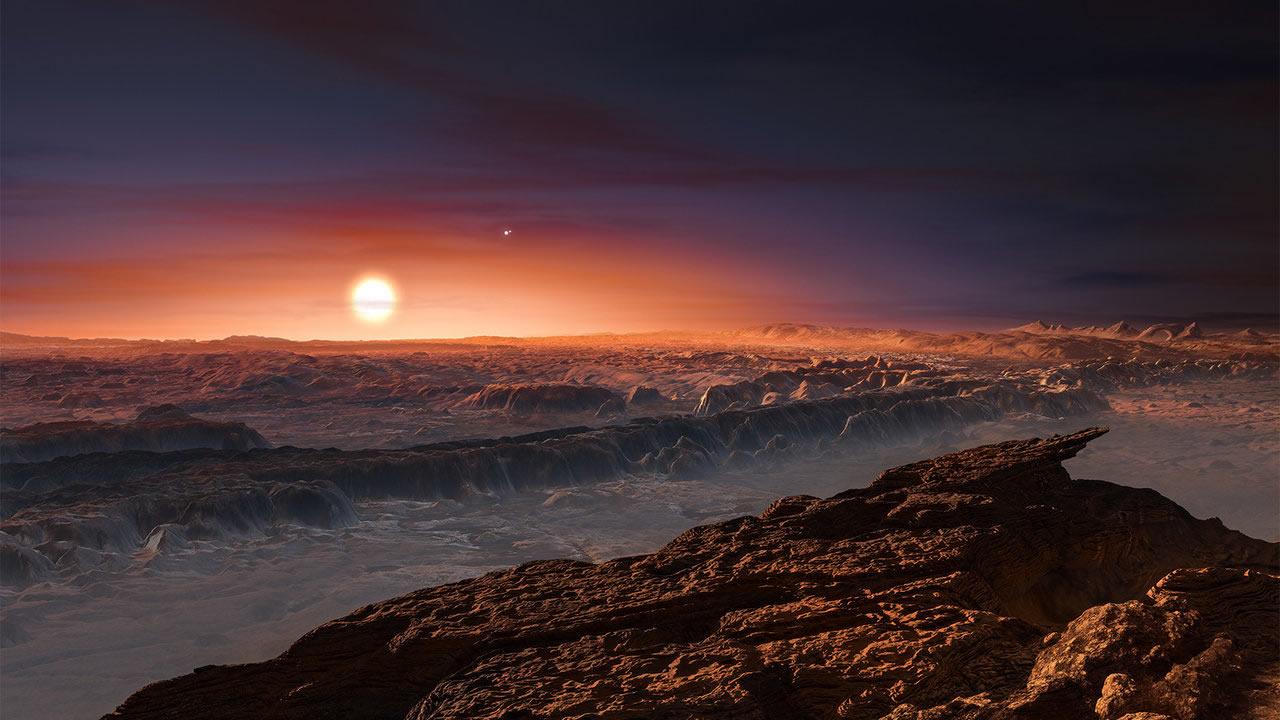 This artist's impression shows a view of the surface of the planet Proxima b orbiting the red dwarf star Proxima Centauri, the closest star to the solar system. The double star Alpha Centauri AB also appears in the image. Credit: ESO/M. Kornmesser

A newly discovered, roughly Earth-sized planet orbiting our nearest neighboring star might be habitable, according to a team of astronomers using the European Southern Observatory’s 3.6-meter telescope at La Silla, Chile, along with other telescopes around the world.

The exoplanet is at a distance from its star that allows temperatures mild enough for liquid water to pool on its surface.

“NASA congratulates ESO on the discovery of this intriguing planet that has captured the hopes and the imagination of the world,” says Paul Hertz, Astrophysics Division Director at NASA Headquarters, Washington. “We look forward to learning more about the planet, whether it holds ingredients that could make it suitable for life.”

The new planet circles Proxima Centauri, the smallest member of a triple star system known to science fiction fans everywhere as Alpha Centauri. Just over 4 light-years away, Proxima is the closest star to Earth, besides our own Sun.

“This is really a game-changer in our field,” said Olivier Guyon, a planet-hunting affiliate at NASA’s Jet Propulsion Laboratory (JPL), Pasadena, California, and associate professor at the University of Arizona, Tucson. “The closest star to us has a possible rocky planet in the habitable zone. That’s a huge deal. It also boosts the already existing, mounting body of evidence that such planets are near, and that several of them are probably sitting quite close to us. This is extremely exciting.”

The science team that made the discovery, led by Guillem Anglada-Escudé of Queen Mary University of London, published its findings on August 25 in the journal Nature. The team traced subtle wobbles in the star, revealing the presence of a star-tugging planet.

They determined that the new planet, dubbed Proxima b, is at least 1.3 times the mass of Earth. It orbits its star far more closely than Mercury orbits our Sun, taking only 11 days to complete a single orbit — a “year” on Proxima b.

The stunning announcement comes with plenty of caveats. While the new planet lies within its star’s “habitable zone” — a distance at which temperatures are right for liquid water — scientists do not yet know if the planet has an atmosphere.

It also orbits a red-dwarf star, far smaller and cooler than our Sun. The planet likely presents only one face to its star, as the moon does to Earth, instead of rotating through our familiar days and nights. And Proxima b could be subject to potentially life-extinguishing stellar flares.

“That’s the worry in terms of habitability,” said Scott Gaudi, an astronomy professor at Ohio State University, Columbus, and JPL affiliate credited with numerous exoplanet discoveries. “This thing is being bombarded by a fair amount of high-energy radiation. It’s not obvious if it’s going to have a magnetic field strong enough to prevent its whole atmosphere from getting blown away. But those are really hard calculations, and I certainly wouldn’t put my money either way on that.”

Despite the unknowns, the discovery was hailed by NASA exoplanet hunters as a major milestone on the road to finding other possible life-bearing worlds within our stellar neighborhood.

“It definitely gives us something to be excited about,” said Sara Seager, a planetary science and physics professor at the Massachusetts Institute of Technology, Cambridge, and an exoplanet-hunting pioneer. “I think it will definitely motivate people to get moving.”

Statistical surveys of exoplanets — planets orbiting other stars — by NASA’s Kepler space telescope have revealed a large proportion of small planets around small stars, she said.

The Kepler data suggest we should expect at least one potentially habitable, Earth-sized planet orbiting M-type stars, like Proxima, within 10 light-years of our solar system. So the latest discovery was “not completely unexpected. We’re more lucky than surprised,” Seager said. But it “helps buoy our confidence that planets are everywhere.”

It’s especially encouraging for upcoming space telescopes, which can contribute to the study of the new planet. The James Webb Space Telescope, launching in 2018, may be able to follow up on this planet with spectroscopy to determine the contents of its atmosphere. NASA’s Transiting Exoplanet Survey Satellite (TESS) will find similar planets in the habitable zone in the stellar backyard of our solar system in 2018.

One of TESS’s goals is to find planets orbiting nearby M-dwarf stars like Proxima Centauri.

“It’s great news just to know that M-dwarf planets could be as common as we think they are,” Seager said.

Another possible inspiration Proxima b could reignite:  the admittedly far-off goal of sending a probe to another solar system.

Bill Borucki, an exoplanet pioneer, said the new discovery might inspire more interstellar research, especially if Proxima b proves to have an atmosphere.

“It may be that the first time we get really good information is from the newer telescopes that may be coming online in a decade or two,” said Borucki, now retired, the former principal investigator for Kepler, which has discovered the bulk of the more than 3300 exoplanets found so far.

“Maybe people will talk about sending a probe to that star system,” Borucki said. “I think it does provide some inspiration for an interstellar mission, because now we know there is a planet in the habitable zone, probably around the mass of Earth, around the closest star. I think it does inspire a future effort to go there and check it out.”