Dr. Candice Bedford and the J5 rover at the test site in Iceland. 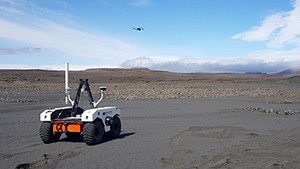 JS rover with the Marscopter drone 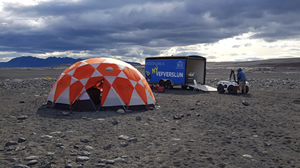 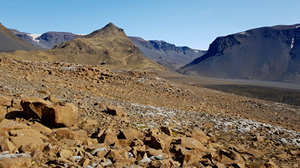 View over the volcanoes to the glacier

Dr. Candice Bedford, a postdoctoral researcher at the Lunar and Planetary Institute, spent a month this past summer conducting field work in the Highlands of Iceland, testing rover and drone prototypes for NASA’s Mars 2020 rover mission. 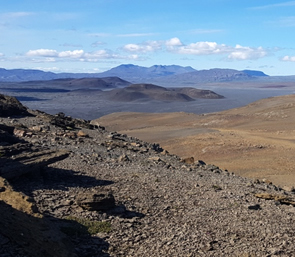 View from a volcano 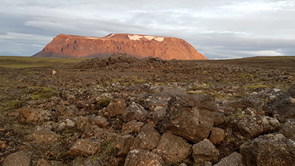 Midnight sun on a table mountain

The goals of this analog mission included operation scenario trials that tested autonomous rover terrain classification software and the best ways for scientists to incorporate the Marscopter (drone) images into daily rover operations.

Iceland is a unique analog for Mars on Earth because its chemistry is rich in iron and dominated by primitive volcanic products, similar to the crust of Mars. Additionally, the field sites at the base of the beautiful Þórisjökull glacier and grand Skjaldbreiður shield volcano contain active braided river and aeolian sedimentary systems. By studying this glacio-fluvial-aeolian system, the team can study the effects of erosion, transportation, deposition, and alteration of sediments derived from primitive volcanic source rocks — a topic that is highly relevant to understanding the ancient Mars sedimentary processes that shaped the crust when water was present on the surface several billion years ago.

In total, six operations scenarios were conducted by a team of scientists and engineers, a drone, and a Mars rover prototype developed by engineers at Mission Control Space Services Inc. Three field sites representing different distances from the sediment source were selected along the river system, in order to investigate the changes in mineralogy and chemistry produced from physical mineral sorting, erosion, and chemical weathering processes.

On a typical day in the field, two scientists were stationed in the ground control center — a large tent that represented an operations room on Earth. They remained in simulation, analyzing and interpreting the downlinked data products from the rover, and sending new commands to drive the rover, collect new data, and further their interpretation of the environment. When the ground scientists sent their commands to the rover, the team of field scientists would emulate the rover's geochemical instruments using a handheld X-Ray fluorescence spectrometer and visible near-infrared spectrometer, and the engineers would drive the rover to the next site selected by the ground scientists. The field scientists also collected sediment samples for detailed laboratory analyses at their home institutions to further characterize the mineralogy and sedimentology of the field sites. The team successfully managed to complete all operations scenarios at each field site.

“Now that I am back”, says Dr. Bedford. “I'm looking forward to analyzing the geological samples along with the rest of the team members and interpreting the data we collected in the field.”

The team’s samples and analyses will provide valuable insight for the operations of future Mars missions, such as the Mars 2020 rover, in addition to how the ancient river and wind-blown processes have modified the martian surface throughout its history.

The team also had the great honor of meeting the President and First Lady of Iceland who wished them well on their scientific endeavors.

The SAND-E project is supported through NASA’s Planetary Science and Technology through Analog Research (PSTAR) program.

SAND-E team meeting the President and First Lady of Iceland.