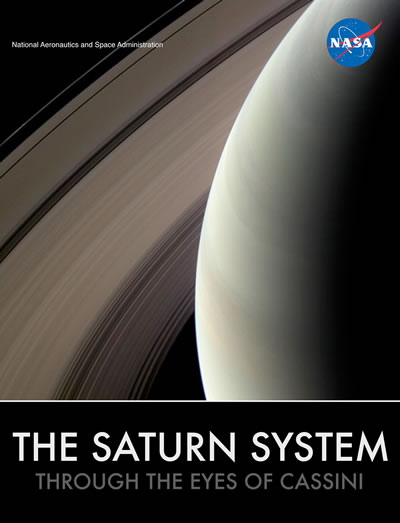 The Lunar and Planetary Institute (LPI), NASA’s Planetary Science Division (PSD), and NASA’s Jet Propulsion Laboratory (JPL) today announced the launch of The Saturn System Through the Eyes of Cassini, an interactive e-book, to commemorate the Cassini-Huygens mission which comes to its fateful end on September 15.

The Cassini-Huygens mission has been nothing short of a discovery machine, captivating us with data and images never before obtained with such detail and clarity. While these images represent the tip of the iceberg—each telling a story about Saturn and its mysterious moons—our hope is that the mission will inspire future artists and explorers. The sheer beauty of these images is surpassed only by the science and discoveries they represent.

The e-book features nearly 100 stunning images taken within the Saturn system by the Cassini spacecraft since its arrival in 2004. In addition to the stunning images, the e-book includes six interactives which transport you to distant locales, such as the shore of one of Titan’s methane seas or the icy plumes of Enceladus. The e-book is available in multiple formats to attract a variety of readers.

The Saturn System Through the Eyes of Cassini