Was Venus once warm and wet? New study of lava flow suggests not. 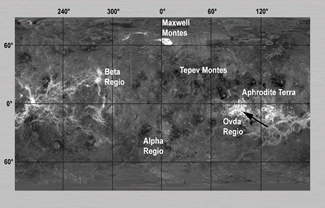 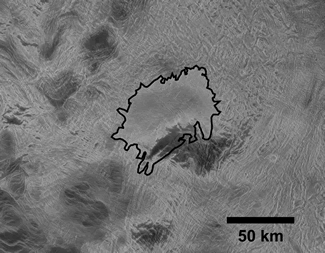 A new study of the Ovda Fluctus lava flow on Venus indicates that it is made of basaltic lava. This discovery weakens the notion that Venus might once have been Earth-like with an ancient ocean of liquid water.

Previous studies suggested that early Venus was once warm and wet based on the chemistry of its atmosphere and the presence of highlands. These highlands were thought to be formed of granitic rock, like Earth’s continents, which required oceans of water to form.

Scientists at the Lunar and Planetary Institute (LPI), including undergraduate student intern Frank Wroblewski from Northland College, find that a volcanic flow on Venus’ Ovda Regio highlands plateau is composed of basaltic lava, calling into question the idea that the planet might once have been Earth-like with an ancient ocean of liquid water.

The LPI team re-mapped the Ovda Fluctus lava flow using radar data. They discovered that the flow is not granitic as was expected from its location, but is more likely made up of basalt rock which can form with or without water. The result has potentially significant implications for the evolutionary history of Venus. The new map and results are published in the Journal of Geophysical Research: Planets.

“We know so little about Venus’ surface,” says team member Dr. Allan Treiman, a scientist at the LPI. “If the Ovda Regio highlands are made of basaltic rock as is most of Venus, they were likely squeezed up to their current heights by internal forces, possibly like mountains which result from plate tectonics on Earth.”

This work began in 2018 as part of the LPI’s Summer Intern Program which brings competitively selected undergraduate students to Houston to do cutting-edge research with scientists from the LPI and the Astromaterials Research and Exploration Science (ARES) Division of NASA Johnson Space Center. LPI is operated by the Universities Space Research Association (USRA).