A team of scientists, including Universities Space Research Association’s David Kring of the Lunar and Planetary Institute (LPI), is studying rock cores recovered by a joint drilling expedition of the Chicxulub impact crater, organized by the International Ocean Discovery Program (IODP) and International Continental Scientific Drilling Program (ICDP), for a first pass at understanding the effects of the impact on life and as a case study of how impacts affect planets.

In April and May of 2016 a team of international scientists drilled into the Chicxulub impact crater, the site of an asteroid impact that occurred 66 million years ago. The crater is buried several hundred meters below the surface in the Yucatán region of México. Until that time, dinosaurs and marine reptiles dominated the world, but the series of catastrophic events that followed the impact caused the extinction of all large animals, which led to the rise of mammals and evolution of mankind. This joint expedition recovered a nearly complete set of rock cores from 506 to 1335 meters (1660 to 4380 feet) below the modern-day seafloor. 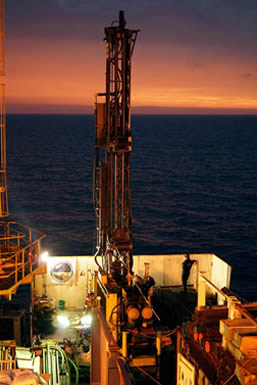 “The borehole has pierced time, bringing us the products of an impact event that changed Earth forever,” says Kring. He further states “with nearly fourteen tons of rock pulled from the depths of the crater, our team is searching for details about the crater’s formation and its effect on the dinosaur’s world.”

LPI Director Louise Prockter says, “We are very glad to be working on this exciting project with the IODP and its U.S. Science Support Program at Lamont-Doherty Earth Observatory of Columbia University. We also thank the University of Bremen for hosting the scientific team in its initial analysis of the core.”

The cores are at the IODP Core Repository at the MARUM — Center for Marine Environmental Sciences, University of Bremen (Germany), where each core is being split in half. The 31-person science team, supported by a team of technicians and students, is undertaking a suite of IODP standard measurements on these cores. Half of each core is being used to take samples for further measurements, and the other half is being preserved for future study by the science community and the public.

The cores include 120 meters (394 feet) of limestone sediments deposited between 66 million years ago and approximately 50 million years ago, as well as some 120 meters (394 feet) of broken and melted rocks burying a ring of mountains — the peak ring that surrounds the center of the crater. There is abundant evidence that a vigorous hydrothermal system existed in the wake of the impact, with fluids flowing through the broken and melted rocks that cover the peak ring.

While the crater marks the impact — infamous for causing 75% of life on Earth to go extinct — the team has also found that microbial life found a foothold in the crater, likely taking advantage of the chemistry and porous nature of the broken and melted rocks. The team also notes that the sediments that bury the crater, which were recovered in the IODP Expedition 364 cores, include records of the critical time intervals when marine life made a recovery at ground zero. Ocean conditions during this time may have been toxic for an extended period after the impact.

The expedition is conducted by the European Consortium for Ocean Research Drilling (ECORD) as part of the IODP. The expedition is also supported by the ICDP, and would not have been possible without the support and assistance of the Yucatán government, Mexican federal government agencies, and scientists from the National Autonomous University of Mexico (UNAM) and the Centro de Investigación Científica de Yucatán (CICY).