Dr. Lynch at the top of Mount St. Helens.

LPI recently welcomed a new staff scientist, Dr. Kennda Lynch, an astrobiologist and geomicrobiologist. Dr. Lynch studies life in extreme environments on Earth as models for characterizing habitable environments and searching for biosignatures on other planetary bodies in our solar system and beyond. Her current research focuses on studying life in hypersaline environments, which recent data suggest are likely ubiquitous throughout the solar system and, especially on ocean worlds, integral to habitable environments. Read LPI’s interview with to Dr. Lynch to learn more. 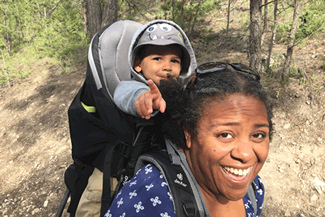 Dr. Lynch hiking with her son in the mountains of Montana.

LPI:  How did you become interested in space science?

KL:  That is a fabulous question. When I ask my mom this question, she said I was an “alien” from the beginning. All I can tell you is that I don’t remember a time when I was not interested in space science. I remember loving Star Wars and Star Trek (because my parents did) and I had a The Empire Strikes Back cake for my 6th birthday. I also remember loving the movies Explorers (starring a very young Ethan Hawke and River Phoenix) and Space Camp, which came out within a year of each other. I just remember that I, too, wanted to go and explore the universe and if the kids in those movies could, then so could I. During that same time period, the Challenger accident happened (which also had a great influence on me).

LPI:  When did you know that you wanted to pursue this as a career?

KL:  It was after Challenger. For some reason, that solidified my resolve to be a part of space exploration. 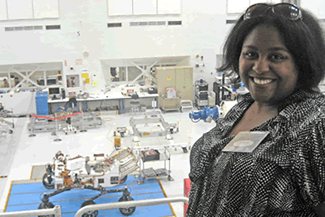 Dr. Lynch pictured with Curiosity rover at NASA’s Jet Propulsion Laboratory before it launched to Mars in 2011.

LPI:  Did you have a mentor or another person in your life who was influential to your decision/career?

KL:  I did not have any one specific person. What I did have was a community of adults that wanted to support and foster my dreams. For example, my parents sent me to science day camps, and bought me a computer so I could learn to code. They would drive me into Chicago so I could go to the Adler Planetarium and the Museum of Science and Industry. They both worked at Sundstrand (a former shuttle contractor) for several years, so they would often bring home NASA pictures of astronauts and the space shuttle. They also fought for my education and enrolled me in a private school because the public school system in my hometown was failing to serve the minority students (especially black students). My mom worked two night jobs in addition to her day job at one point to make sure my tuition was paid so that I could stay. In middle school and high school, I had teachers and school counselors that pushed me to succeed. In college, I had a lot of opportunities to participate in summer research and internships. 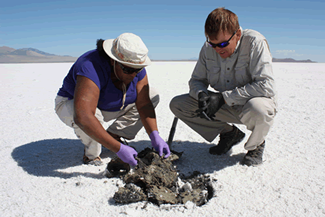 All of those experiences (including internships at both Kennedy and Johnson Space Center) continued to solidify my resolve to work in space exploration.

KL:  I have a dual B.S. in General Engineering and Biology from the University of Illinois (1999) with a concentration in Space Life Sciences and Advanced Life Support and an M.S. in Aerospace Engineering Sciences from University of Colorado at Boulder (2008).

I received my PhD in Environmental Science and Engineering from Colorado School of Mines (2015). My dissertation title was A geobiological investigation of the hypersaline sediments of Pilot Valley, Utah: A potential terrestrial analogue to ancient lake basins on Mars. My advisors were Dr. Junko Munakata Marr and Dr. John Spear.

LPI:  What is the focus of your research? 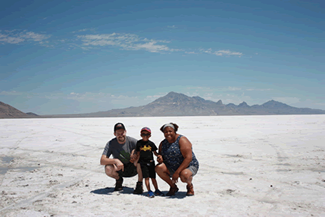 Dr. Lynch with her family in the Bonneville Salt Flats, Utah.

KL:  My research focuses on studying life in extreme environments on Earth as models for characterizing habitable environments and searching for biosignatures on other planetary bodies in our solar system and elsewhere. I currently focus on hypersaline systems and their associated salts as we are learning that salts are ubiquitous with liquid water throughout our solar system, especially on ocean worlds. I also study specific types of microbial life such as Perchlorate-reducing microorganisms (PRM). Perchlorate salts are also potentially ubiquitous in the solar system and can help water stay liquid at very low temperatures. These salts have also been found on Mars, and PRM can use perchlorate and other oxyanions for energy.

LPI:  What is the most unexpected or exciting result that you’ve encountered in your research?

KL:  The most exciting thing that we’ve encountered so far is evidence of perchlorate-reducing microorganisms actively metabolizing naturally-deposited perchlorate in a hypersaline environment. 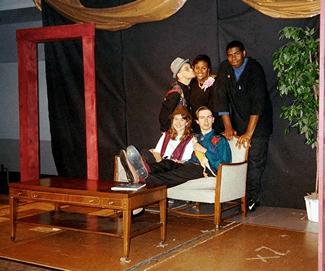 Dr. Lynch pictured with fellow members of the “Actors in the Attic” studio theater company after their debut performance at Allen Hall at the University of Illinois.

This is the first reported incidence of perchloratereduction in an extreme environment and if we can confirm this finding, then we will be able to provide more insight to mission teams about perchlorate supported ecosystems on other planets.

LPI:  What do you most look forward to as it relates to planetary science over the next 10+ years?

KL:  Oh wow, there are so many things to look forward to in the next decade of planetary science and exploration. I’m very excited for the Mars 2020 mission to Jezero crater and I cannot wait to see what learn about the potential for life on the red planet when we get there. I’m also excited for all the missions to our other ocean worlds like Europa, Titan, and Enceladus. We have so many habitable worlds in this solar system and we need to do our best to explore them all so that we can answer the big question:  Is there life elsewhere, or are we alone?

LPI:  What would be your dream research trip?

KL:  Do I have to choose one? Well, I would love to get to Mars for sure, but I think it would be awesome to see some of the icy worlds, in particular I would love to see the tiger stripes on Enceladus.

LPI:  Share a hobby or interest outside of work.

KL:  I love performance art and theater. In high school and college, I was an amateur actress and singer, and I also co-founded and operated a small student theater company for three years. In grad school, I did not have a lot of time to be on stage, but I always held season tickets to the local performance arts center and often spent Friday nights at a play, musical, or dance performance.