Scientists Use the Moon to Study a Dinosaur Killer 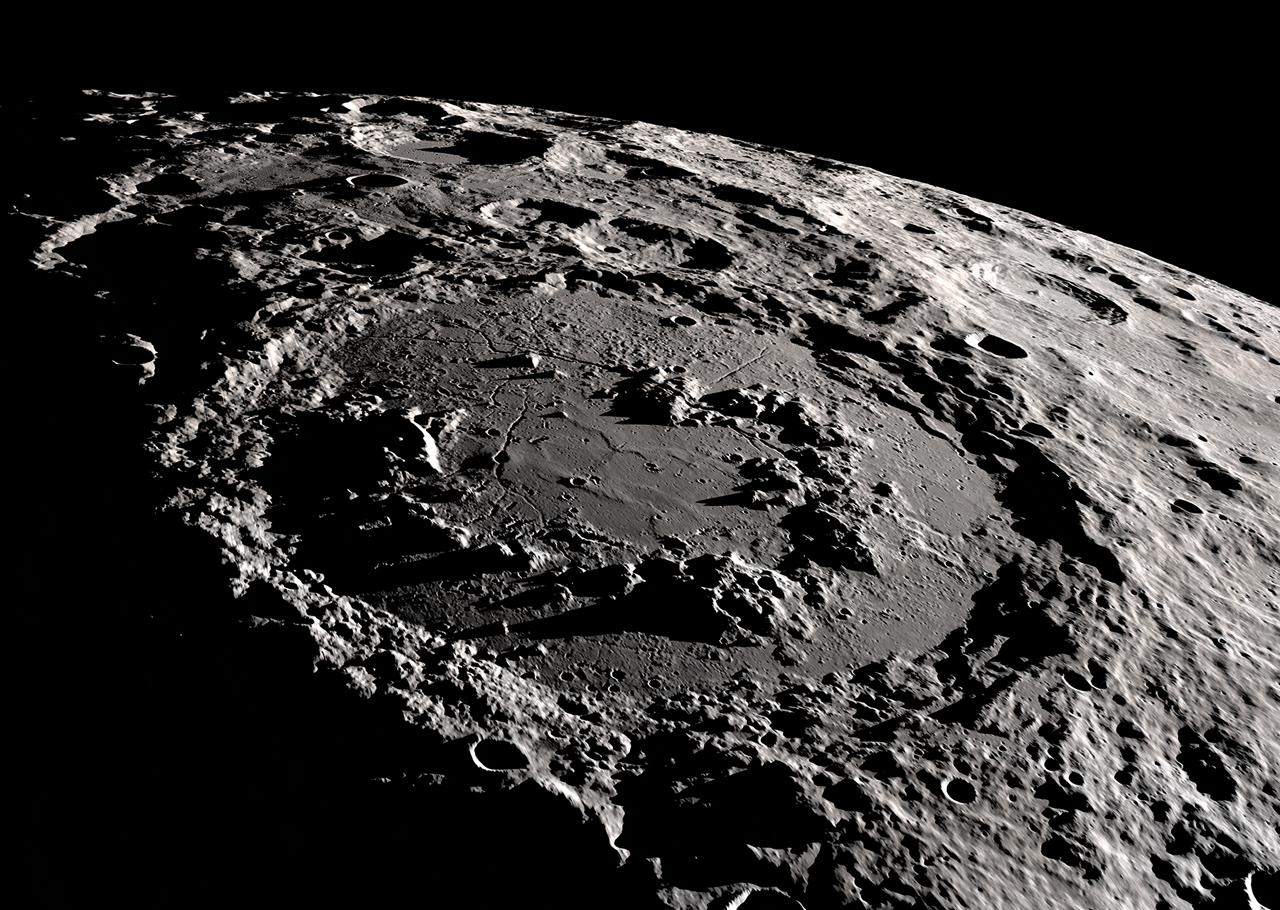 The Moon's 320-kilometer-diameter Schrödinger basin is the best preserved impact basin of its size. Its broad flat floor offers several safe landing sites, and the geology within the basin is extraordinary. The 2.5-kilometer-high peak ring is 150 kilometers in diameter. During the impact event, rock rose from deep within the lunar crust and towered briefly in a central peak over the lunar surface before collapsing downward under the influence of gravity and flowing to form the mountainous peak ring seen today. A similar process is envisioned for the Chicxulub crater on Earth, which is related to the extinction of dinosaurs 66 million years ago. Illustration credit: NASA Scientific Visualization Studio (NASA SVS).

A team of scientists led by Universities Space Research Association’s David Kring at the Lunar and Planetary Institute is using observations of the Moon to further understand the impact on Earth that is linked to the extinction of the dinosaurs. The team concludes that the mountain-sized rings that form in the Moon’s largest impact craters were produced by the collapse of central uplifts that rose tens of kilometers above the surface as a result of impact. Those findings, based on observations of the Moon’s Schrödinger basin, with implications for Earth’s Chicxulub crater, are published in the current edition of Nature Communications.

The Chicxulub crater is the best-preserved example of a peak-ring basin on Earth, but it is buried beneath approximately 1 kilometer of sediments. By comparison, the Schrödinger impact basin is the best-preserved basin of its size on the Moon; however, unlike the Chicxulub crater, it is exquisitely exposed on the lunar surface and accessible to study using remote sensing techniques.

The lead author, David Kring, says “the features seen in the Schrödinger basin also paint an amazing picture of Earth’s Chicxulub crater. Observations of the lunar basin suggest the rock in the Chicxulub basin’s peak ring flowed, in part, because it was dissected into a large number of rocky blocks with reduced cohesion and possibly offset by kilometer-scale fault motions. The Chicxulub peak ring, now buried, would have been composed of rocks from deep in the Earth’s crust and, when emplaced, would have produced a jagged mountain range that rose from the crater floor. If one wants to imagine how the Chicxulub crater looked soon after impact, one only needs to peer at the Schrödinger basin on the Moon. ”

Kring further states “this is an excellent example of how studies of the Moon can help us better understand our own planet Earth.” He adds that “future missions to the Schrödinger basin will be laced with discoveries that catalyze our understanding of planet-building processes and the impact bombardment that reshapes planetary surfaces. Studies identify the Schrödinger basin as one of the highest priority destinations for future explorers.”

Scientists addressed a key question related to both basins regarding the formation of their mountain-sized peak rings. New geologic mapping of the 2.5-kilometer-high peak ring in Schrödinger suggests the rock was uplifted from the Moon’s middle to lower crust. That geologic mapping, plus complex computer simulations of the impact event, indicates that rock from depths down to 30 kilometers below the lunar surface rose in a central uplift, towered briefly at least 20 kilometers above the lunar surface, before collapsing outward to form the circular range of mountains seen today. Within an hour of impact, a new 320-kilometer-wide basin and its enormous peak ring had been created on the Moon. Similar processes occurred when the Chicxulub crater formed on Earth 66 million years ago, although those processes occurred faster due to Earth’s greater gravity. The Chicxulub impact event is famous because of its link to the extinction of dinosaurs.

Because the Schrödinger basin’s peak ring came from the middle to lower crust of the Moon, it can be used to test the lunar magma ocean hypothesis and, thus, how the Moon was transformed from a molten mass into a rocky planetary body. That hypothesis suggests the Moon was once molten and, as it cooled, differentiated into layers with unique crystal compositions. The authors identified specific rocky exposures in the peak ring that robotic rovers and astronauts can sample in the future to further test that hypothesis.

Kring worked closely with LPI’s Georgiana Kramer and Mitali Chandnani (formerly of the LPI and now at the University of Alaska), who used spacecraft data from the Lunar Reconnaissance Orbiter and the Chandrayaan-1 orbiter to map the geology of the Schrödinger peak ring. Co-authors Gareth Collins (Imperial College London) and Ross Potter (formerly of the LPI and now at Brown University) took the lead on computer simulations of the Schrödinger impact event.

The work by Kring, Kramer, Potter, and Chandnani was supported at the LPI by cooperative agreements to Universities Space Research Association from NASA’s Planetary Science Division and Solar System Exploration Research Virtual Institute. The work by Collins was supported by the UK Science and Technology Facilities Council.