The Formation of the Chicxulub Crater and an Avenue for Life 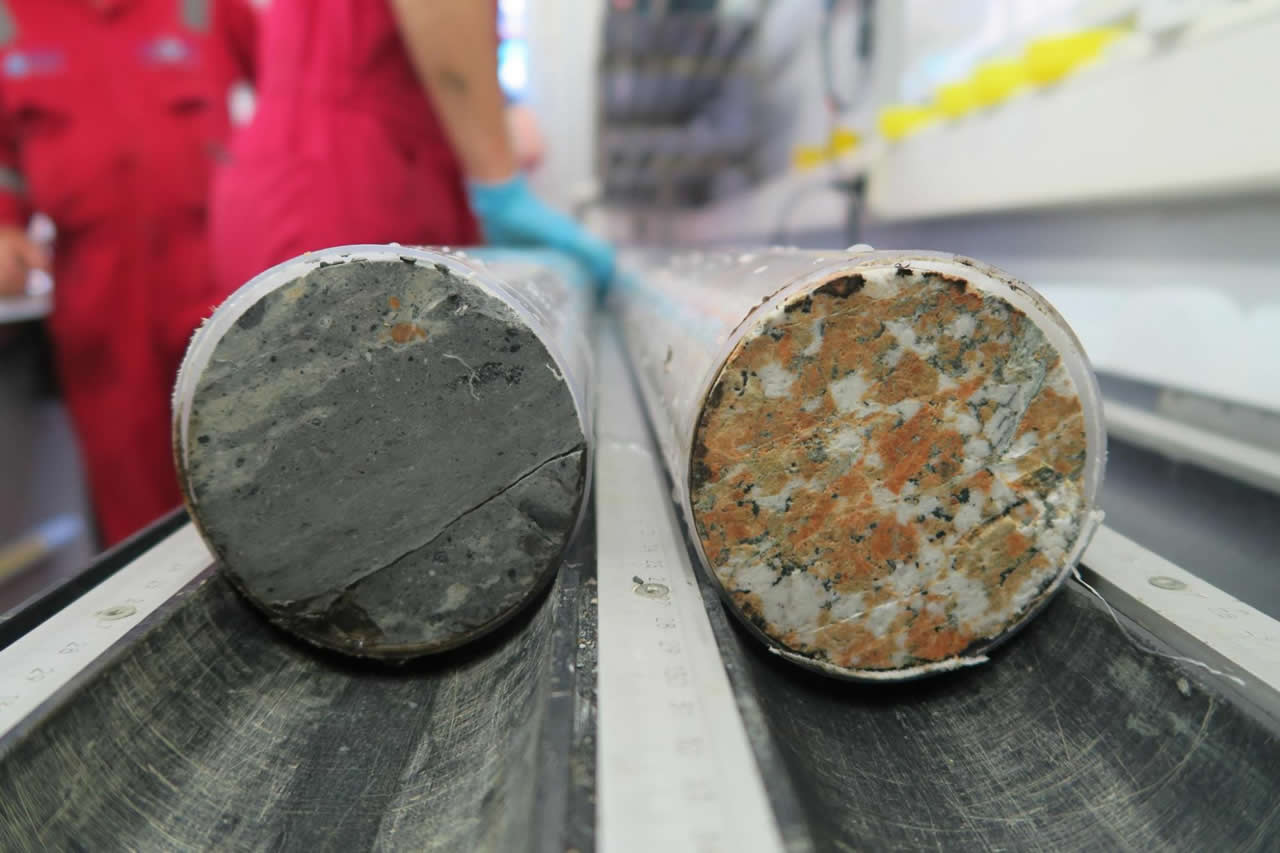 In a paper published today in the journal Science, an international team of scientists show how the basement of Earth’s crust was uplifted over the surface to produce a shattered peak ring in the Chicxulub impact crater that was susceptible to hydrothermal alteration.

The Chicxulub crater was produced ~65 million years ago when an enormous asteroid or comet struck the submerged Yucatán Peninsula and extinguished most life on Earth.  While most efforts have been directed at that environmental calamity and the extinction of life, it has been difficult to probe the crater itself, which lies buried beneath ~1 kilometer of sedimentary rock.

Co-author Dr. David A. Kring of Universities Space Research Association (USRA)/Lunar and Planetary Institute (LPI), one of the first people to recognize the impact origin of the Chicxulub structure 25 years ago, “still finds amazing the impact’s energy and its ability to reshape the Earth’s crust so quickly.  It is easy to be startled by a process that altered the evolution of our planet.”

Earlier this year, a joint expedition of the International Ocean Discovery Program (IODP) and International Continental Drilling Program (ICDP) drilled into the peak ring of the Chicxulub crater.  A primary goal of the expedition was to test models of peak-ring formation using nearly 14 tons of rock core recovered from depths between 506 and 1335 meters beneath the sea floor. 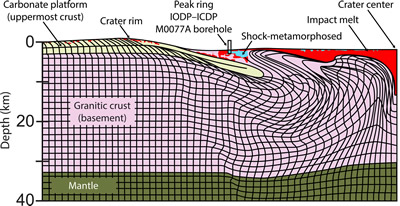 Schematic diagram showing how the granitic basement (pink) punched upward and flowed over the pre-impact surface (yellow) of Earth to form the peak ring that was encountered in the 1335 meter-deep M0077A borehole off the coast of the Yucatán Peninsula. The underlying mantle of the Earth is dark green. Material that was shock-melted is shown in red and material that was shock-metamorphosed is shown in blue. This rendering is based on a computer simulation of the impact that is consistent with the borehole observations. The gridded mesh produced by the simulation helps illustrate how rock flowed. Illustration credit: USRA/LPI/Imperial College London

In an initial study of the core, the team found the peak ring is composed of granitic rock that once existed down to 8 to 10 kilometers beneath the surface.  That rock was shattered and shocked, then uplifted above the Earth’s surface, before flowing outward over the floor of the Gulf of Mexico to form a ring of rock several hundred meters high during the formation of the crater.

Kring says “If one wants to imagine how the Chicxulub crater looked soon after impact, one only needs to peer at the Schrödinger basin on the Moon.” The peak ring of the Chicxulub crater is similar to that seen in the Moon’s Schrödinger impact basin, which Kring and others showed was produced by the same mechanism in a paper published last month in Nature Communications.

The team notes that the shocked and shattered rocks of the Chicxulub peak ring are perfect conduits for impact-generated hydrothermal fluids.  Kring previously proposed an impact-origin of life hypothesis that suggests ancient impact-generated hydrothermal systems may have been the crucibles for pre-biotic chemistry and provided suitable habitats for the early evolution of life on Earth and potentially Mars.  While details of the hydrothermal system exposed in the new core are still under study, the altered rocks in the peak ring suggest it could have harbored life after the impact and hint that similar opportunities may have existed on Earth long ago.

The new study was led by Professors Joanna Morgan (Imperial College London) and Sean Gulick (University of Texas at Austin) and involves a team of scientists representing twelve countries.  Co-author Kring is a Senior Staff Scientist with USRA/LPI.