The overall set of lunar samples collected during the Apollo program can be classified into three major rock types, basalts, breccias, and lunar highland rocks. The Apollo 16 sample collection is dominated by breccias, and there are also some important examples of highland crustal rocks. There are no basaltic rocks in the Apollo 16 samples except for tiny clasts within some of the breccias. The Apollo 16 crew collected 731 individual rock and soil samples, including a deep drill core with material from 2.2 meters below the lunar surface, with a total mass of 95.7 kilograms.

Although it was thought prior to the Apollo 16 mission that the landing site was covered by volcanic plains, this turned out not to be the case. Instead, virtually every rock collected on Apollo 16 was a breccia. Breccias are rocks that are composed of fragments of other, older rocks. Over its long history, the Moon has been bombarded by countless meteorites. These impacts have broken many rocks up into small fragments. Sometimes, the heat and pressure of these impacts fuses small rock fragments into new rocks, called breccias. Many such fragments are visible in the breccia shown here. In some cases, the rock fragments that form a breccia are themselves even older breccias. Such rocks have experienced complex histories involving multiple generations of impact events, and deciphering these histories is a great challenge. Large impact can also completely melt pre-existing rock, producing new rocks that are called impact melt rocks.

The most likely sources for the impact debris found at the Apollo 16 landing site are large impact basins, which can distribute ejecta over very large distances. This ejecta can churn up preexisting material when it impacts the surface at high speeds. Some of the samples collected on Apollo 16 probably represent churning of old rocks rather than the addition of new material from the distant basin. The Nectaris and Imbrium basins were probably important contributors to the geology of the Apollo 16 landing site. Nectaris is the nearest large impact basin, a distance of less than 200 kilometers from the basin rim to the landing site. Although Imbrium is much further away, with a distance of 1000 kilometers from the basin rim to the landing site, Imbrium was also a very large impact event, and ejecta from this impact can be found near the landing site. Although the Apollo 16 samples were collected fifty years ago, there are still disagreements about which impact basins produced the Apollo 16 samples. One interpretation is that the older Descartes Formation is related to Nectaris basin ejecta and that the slightly younger Cayley Formation is related to Imbrium basin ejecta. This is consistent with chemical differences among the two sets of rocks and the relative ages of the two impact basins (the Nectaris basin is slightly older than Imbrium). An alternative hypothesis is that both the Descartes and Cayley Formations are from the Imbrium basin impact and represent different portions of the ejected material.

Left: Apollo 16 sample 65015 has a mass of 1.8 kilograms and was collected near the base of Stone Mountain. It is a fine-grained impact melt rock from the Cayley Formation.

Right: Apollo 16 sample 67015 has a mass of 1.2 kg and was collected at the rim of North Ray Crater. It is a coarse-grained impact breccia from the Descartes Formation. About 55% of the rock consists of a fine-grained matrix, and the rest is a mixture of angular fragments of older rocks and minerals of varying composition, with individual fragments sometimes exceeding a centimeter across.

Rocks from the Lunar Highland Crust

Very early in the Moon's history, much of its outer region was molten, a stage in lunar history known as the magma ocean. As the magma ocean cooled and solidified, a type of rock known as anorthosite, which consists mostly of the mineral plagioclase, floated to the surface. Small fragments of anorthosite were found beginning on Apollo 11, and a larger sample was found on Apollo 15. Two anorthosite samples collected on Apollo 16 are much larger than those found on any other Apollo mission. 60025, the sample shown here, solidified 4.36 billion years ago. 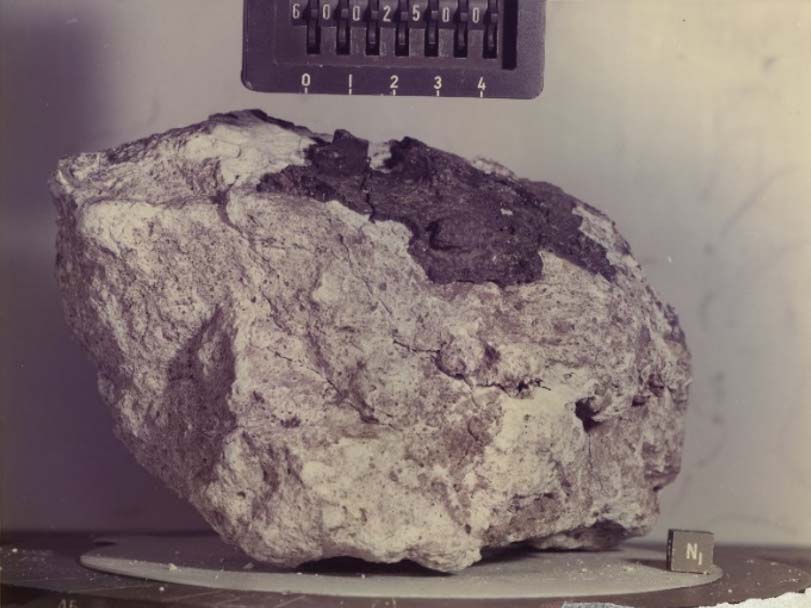 Apollo 16 sample 60025 is an anorthosite with a mass of 1.8 kg. The white to light gray material is the anorthosite, which is covered in some places by a thin layer of dark impact melt glass.

A few tiny basalt samples were collected on Apollo 16 as clasts in breccias. These basalts are rich in the elements titanium (as on Apollo 11) and aluminum. The basalts formed 3.79 billion years ago. They were most likely hurled to this location by the impact that produced a large crater. The most likely source crater is Theophilus, which is 100 kilometers in diameter and 250 kilometers from the landing site. This would imply that these basalts are fragments of Mare Nectaris.