Welcome to the LPI Mars Polar Science topical website, whose purpose is to provide one-stop access to the latest news and advances in Mars polar and climate research for scientists, students, educators and the general public.

Over the past 15 years, our understanding of the Martian polar regions has been greatly advanced by the analysis of data acquired by a small armada of orbiting and landed spacecraft. These data have yielded the first high-resolution topographic maps of the north and south polar layered deposits, submeter-scale images of the stratigraphy exposed in the polar troughs and reentrants, radargrams of the basal topography and internal structure of the deposits, year-round coverage of the thermophysical, radiative, and compositional properties of the polar atmosphere and surface, and in situ investigations of the near-surface volatile stratigraphy, soil composition, geology, and meteorology of the Martian high arctic.

The Martian climate exerts a powerful influence on the planet’s geologic, hydrologic, and atmospheric evolution, as well as its habitability. By analogy with terrestrial ice core studies, the Martian polar deposits are believed to contain a climate record dating back many millions to hundreds of millions of years.  However, to decipher this record, we must improve our understanding of the age and stratigraphy of the deposits; their depositional, erosional, deformational and melting histories; and their long-term exchange with surface and subsurface ice deposits elsewhere on the planet.

It was to advance this understanding, and promote the exchange of knowledge and ideas between planetary and terrestrial scientists interested in polar and climate research, that the First International Conference on Mars Polar Science and Exploration was organized at Camp Allen in Houston, Texas, in October, 1998.  Because much of the existing expertise in polar science and climate research exists outside of the United States, the venues of the four succeeding conferences -- Reykjavik, Iceland (August 2000), Lake Louise, Canada (October 2003), Davos, Switzerland (October 2006), and Fairbanks, Alaska (September 2011) – where chosen to both encourage greater international and interdisciplinary participation and to provide access to a diverse range of glacial and cold climate landforms (not found in the contiguous US) for the conference field trips.

An important product of each meeting has been the identification of ‘Key Questions and Needed Observations’ by the conference participants, which contributed to the development of the scientific rationale for the Phoenix Lander Mission to the Martian high arctic in 2008 and provided critical input for every revision of the MEPAG Science Goals and Objectives document since 2000.  Another important product has been the publication of 88 peer-reviewed journal articles in the five Mars Polar Science special issues of Icarus, which were organized to capture the scientific output of each meeting.

This topical website is intended to aid those interested in Mars polar and climate research by providing one-stop access to the latest news, information about past and future meetings, a searchable database of Mars polar science peer-reviewed publications and special issues, educational resources and student research opportunities, and a variety of other web-based resources.

How to make editorial contributions to the Mars Polar website.

The internal structure of the Mars North Polar Layered deposits, as revealed by the SHARAD orbital radar sounder on the Mars Reconnaissance Orbiter (NASA/JPL/ASI) 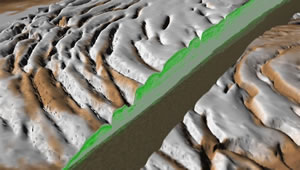