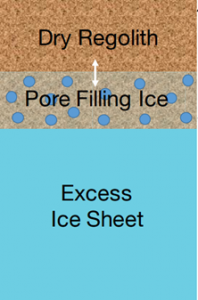 The conventional picture of Mars’ Amazonian age midlatitudes is one of pore-filling ground ice. However, multiple observations suggest that excess ice sheets have been common and widespread in the subsurface of the northern midlatitudes of both past and present Mars, and the debate is on the timing and age of the emplacement of these excess ice sheets. Ali Bramson and colleagues modeled how these excess ice sheets could have been preserved, as well as their survival time. Results show that there is minimal ice loss when Mars’ orbital obliquity was high prior to 4 million years ago, and that most ice sheets have retreated since then due to a drop in average obliquity. These results indicate that the present subsurface ice sheets on Mars, which have survived for at least the last 4 million years, may be 21 million years old or even older. They also found that the retreat of these ice sheets in the last 4 million years contributed to about 6% of the volume of the north polar layered deposits. The findings have important implications for the past climate of Mars, its subsurface structure, and the ice-deposition debate. READ MORE »