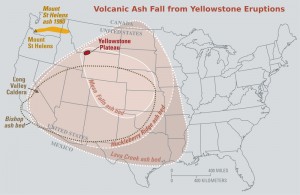 Yellowstone National Park’s supervolcano last erupted about 640,000 years ago, forming a caldera almost the width of the entire park and spewing a thick layer of ash across North America. James Kennett of the University of California in Santa Barbara led a team that compared mud cores sampled from the coast of Santa Barbara to a climatic record with decadal resolution and found that rather than a single event, Yellowstone erupted twice within a span of 270 years, each episode lasting about 80 years. In addition, the volcanic events were precisely coincident with, and thus possibly the cause of, two episodes of abrupt sea-surface cooling by ~3º C. READ MORE »