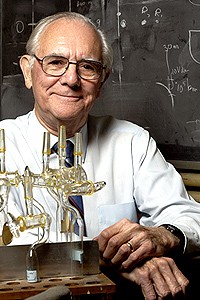 Robert N. Clayton, a Canadian-American chemist and academic, died in his sleep on December 30, 2017, after a battle with Parkinson’s Disease. Clayton was the Enrico Fermi Distinguished Service Professor Emeritus of Chemistry at the University of Chicago.

Born in Hamilton, Ontario, Clayton graduated from Queen’s University with undergraduate and master’s degrees. He completed a Ph.D. in 1955 at the California Institute of Technology, where he was mentored by geochemist Samuel Epstein. His first academic appointment was at Penn State University. In 1958, he joined the chemistry faculty at the University of Chicago, where he took over the laboratory of Nobel Prize winner Harold Urey. From 1961 to his retirement in 2001, he held joint appointments in the chemistry and geophysical sciences departments. He directed the Enrico Fermi Institute at the university from 1998 to 2001.

Clayton pioneered the use of oxygen isotopes, chemical fingerprints found in meteorites and lunar rocks, to better understand the processes that formed the planets and asteroids early in the history of the solar system. His studies provided surprising evidence supporting the theory that the Moon was part of the Earth until a collision with another planet-sized object blasted them apart.

Most of Clayton’s lunar research stemmed from his examination of approximately 300 samples collected during all six Apollo moon landings from 1969 to 1972, and those collected during the Soviet Luna 16 and 20 robotic missions. But his laboratory also became well known as a clearinghouse for the analysis of unusual meteorites.

While studying meteorites with colleagues at the Fermi Institute, Clayton discovered in 1973 that the chemistry of oxygen in the early solar system was fundamentally different from that known on Earth. This led to the recognition of the importance of photochemistry (the interaction of light and chemicals) in the formation of the planets and to a new prediction of the abundances of oxygen isotopes in the Sun.

Clayton and his colleagues identified the first lunar meteorite in 1983. And by studying martian meteorites they showed in 1992 that Mars probably once had water on its surface or in its atmosphere. He was also a member of a team that in 2000 established the Tagish Lake meteorite from Canada as perhaps the most pristine sample of the solar system ever studied.

In 1996, Clayton was named to the National Academy of Sciences. He was also named a fellow of the Royal Society of London and the Royal Society of Canada. In 2004, he was given the United States’ highest scientific honor when he was chosen to be among the 2004 recipients of the National Medal of Science. Clayton was cited “for his leading contributions to cosmic chemistry, from pre-solar system dust to planets, and for being an exemplary role model as a mentor, teacher, and advocate for rigorous science.”