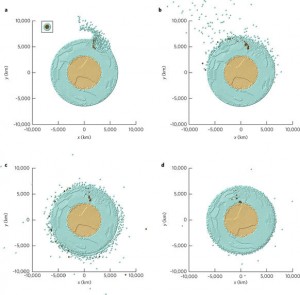 After the formation of the Moon, leftover planetesimals continued to bombard Earth for a prolonged period of time, adding as much as 0.5% of Earth mass (2×1024 kg of material). This value is based on measurements of highly siderophile (“iron-loving”) element concentrations in the mantle and the assumption that all highly siderophile elements delivered by impacts were retained in the mantle. Recent work by Simone Marchi and colleagues suggest that late accretion may have been dominated by large, differentiated bodies, meaning the highly siderophile elements were sequestered primarily in metallic cores. Through hydrodynamic simulations they show that these planetesimals’ cores could descend into Earth’s core or escape being accreted altogether. Either scenario affects the interpretation of measured elemental abundances in Earth’s mantle, which would change interpretation of Earth’s late accretion mass, increasing it by two to five times. READ MORE »