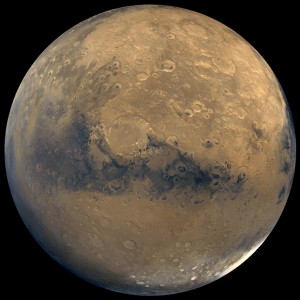 Multiple observations suggest that extensive ice sheets have been common and widespread in the subsurface of the northern mid-latitudes of Mars, but how much ice is buried beneath the surface remains unknown. A recent study led by Colin Dundas at the USGS-Flagstaff found evidence for exposed subsurface ice sheets along scarps created by erosion. Using multiple datasets from the Mars Reconnaissance Orbiter (MRO), they examined eight locations that have steep, pole-facing scarps. They found that the exposed ice is relatively pure, appears to be layered, and is found at depths ranging from 1-100 meters. READ MORE »