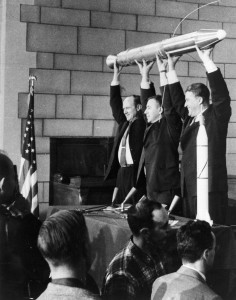 Tomorrow (January 31) marks the 60th anniversary of the launch of Explorer 1, the United State’s first satellite. Besides being a technological breakthrough of launch capabilities, Explorer 1 detected the existence of charged particle radiation trapped by Earth’s magnetic field, later named the Van Allen Belts, after University of Iowa physicist James Van Allen, who hypothesized the existence of these radiation belts and designed the Explorer 1 mission. In his words: “It inspired an entire generation of young men and women in the United States to higher achievement and propelled the western world into the space age.” READ MORE »