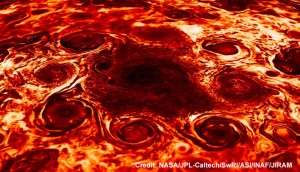 The Juno spacecraft, orbiting Jupiter since July 5, 2016, has provided a wealth of data that are warping and overturning our understanding of its structure. Among the most mind-bending discoveries are the clusters of cyclones around Jupiter’s poles. Images from the Jupiter Infrared Auroral Mapper (JIRAM) and the spacecraft’s regular camera (JunoCam) show the north polar vortex surrounded by eight smaller cyclones (see image) in a nearly-perfect octagon. The south polar vortex, however, is surrounded by only five cyclones in a pentagon. These cyclone clusters have persisted essentially unchanged through Juno’s seven months of observations; akin perhaps to the stability of Jupiter’s Red Spot cyclone, which has persisted for centuries. The Juno science team is eagerly awaiting the spacecraft’s next passes over Jupiter’s poles to see if the cyclone structure changes.