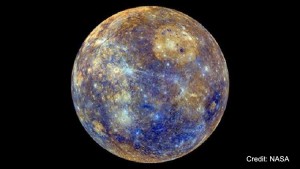 Evidence for water ice has been found in Mercury’s permanently shadowed regions (PSR) of the two poles using MESSENGER’s radar images with limited resolution and spatial coverage. Using the Arecibo radar observations with significantly improved imaging coverage, Nancy L. Chabot and her colleagues mapped the radar-bright deposits in the PSRs of both poles on Mercury, and they found that the amounts of radar-bright deposits at the south pole are twice that of the north pole. The results suggest that polar water ice on Mercury may have been delivered by a large impact of a comet on the planet. READ MORE »