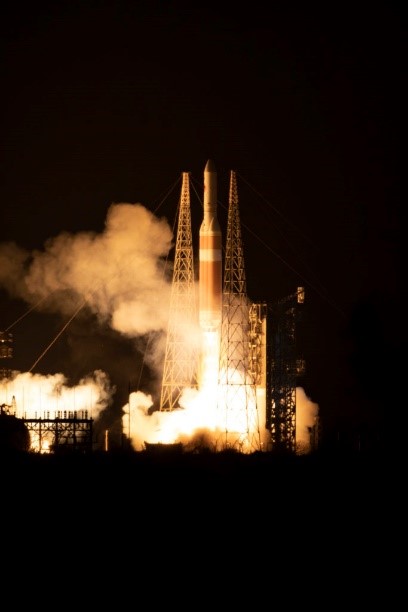 The Parker Solar Probe, named after heliophysics pioneer Dr. Eugene Parker, is on its way to the Sun. The liftoff took place at 3:31 a.m. EDT on Sunday, August 12, 2018 from Cape Canaveral Air Force Station, Florida. During its mission, the Parker Solar Probe will use gravity assists from Venus over nearly seven years to bring its orbit closer to the Sun. By getting as close as 3.8 million miles (6.1 million km) from the Sun’s surface, it will fly into the outermost part of its atmosphere, known as the corona, for the first time. While facing intense heat of temperatures up to 2500 °F (1377 °C) and solar radiation, the Probe will employ a combination of in situ measurements and imaging which will contribute to our understanding of the corona and expand our knowledge of the origin and evolution of the solar wind. Tracing how energy and heat move through the solar corona and exploring what accelerates the solar wind and solar energetic particles are the primary science goals of the mission.